Was this article useful?
Click the thumbs up >
Over the last five years, the fastest growing sector in percentage (and probably profitability) terms has been luxury sports cars –sports cars and coupés costing more than £30k.

The wave of takeovers of the likes of Aston Martin, Bentley and Lamborghini turned off-beat choices for the seriously dedicated into realistic choices for anyone with enough money.

A Bentley became no more demanding than a Mercedes saloon and an Aston became as practical as a Jaguar XK.

The resulting growth has been spectacular, with penetration increasing by more than half between 2002 and 2007. 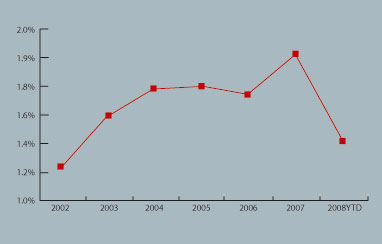 However, the wheels seem to be coming off in 2008 – and not altogether unexpectedly.

When the economy is frothy, sales shoot up (as they did in the late 1980s) and when the economy turns down, they become something of an embarrassment.

There are now two big problems facing the sector: Firstly, buyers who could still afford a new Bentley or whatever may feel that now is not the time to be seen taking delivery of such a symbol of conspicuous consumption.

Secondly, the cost of ownership is probably on the brink of rising substantially.

There are a huge number of used luxury sports cars coming on to the market just as buyers are tightening their belts, which is likely to lead to substantial falls in residual values.

The fact that new buyers can afford to lose a lot of money is not the point – they do not want to look like mugs.

The prospect of running a DB9 or Continental with only modest depreciation was one of the things that made such cars so much more attractive than, say, a Vanquish or a Ferrari 575.

The difference now is that far more money is at stake. When Aston Martin used to teeter on the verge of collapse in the 1970s or 1980s, a few million pounds was at stake.

In the long term, the economy will no doubt recover, but will the second-hand market?

Road tax will only rise gradually until 2011 but, after that, would anybody count on high CO2 vehicles getting off relatively lightly?

Without a strong second-hand market, there is no new market for luxury cars, and used car buyers are obviously far more sensitive to running costs.

Luxury carmakers are hardly comparable to financial institutions in terms of their exposure to risk, but used buyers may become as averse to 500 bhp sports cars as they are to a rights issue from Bear Sterns.