Was this article useful?
Click the thumbs up >
Most Japanese car parts (Toyota in particular) have traditionally been more expensive than their European equivalents.

As a result a healthy independent aftermarket has grown up for ‘Japanese parts for Japanese cars’.

The last time we surveyed Toyota they struggled to compete with the independent aftermarket.

The dealer prices were supplied by Toyota GB and the competition comes from an internet retailer, Japanese specialist and an independent factor/retailer.

Where the aftermarket companies offered a part from a specialist Japanese supplier we have used this.

Toyota has done a great deal of work on its parts pricing for the independent repairer and, in two of the three models surveyed, it has paid dividends.

Now its policy needs to apply to all popular models (the Rav4 is definitely one).

For the independent parts suppliers this is another example of how far manufacturers and their dealerships are taking the fight to them.

A very high level of both service and parts availability is more important than ever to ensure that they retain their place as the prime suppliers to the independent repair market. 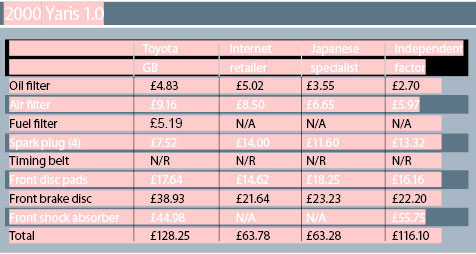 Toyota takes the honours by virtue of being able to supply a full basket.

The fuel filter for both this and the Corolla are ‘in-tank’ items and, as such, are rarely available in the aftermarket.

The Toyota prices are very competitive and lower than two years ago.

*Unable to supply. N/A not available.eN/R not required. 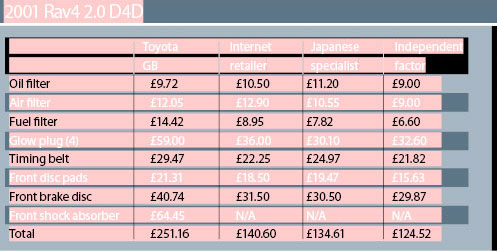 Again it’s only the VM that can supply the whole range and this time it’s the shock absorber that causes the problem. If you factor out the cost of the shock absorber then the dealer prices are relatively high compared to the aftermarket offerings with a differential of between 35 and 50%.

*Unable to supply. N/A not available. 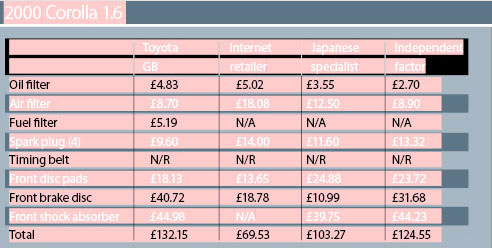 Again no fuel filter from the aftermarket but given the fact that ‘in-tank’ filters are rarely changed, it probably doesn’t matter too much. This is another very creditable performance from the dealer although its brake disc price is shamed by the specialist.

*Unable to supply. N/A not available. N/R not required.

Is Volvo putting up a fight against independent parts suppliers prices. Find out in the May 2 issue of AM.