Was this article useful?
Click the thumbs up >
Citroën UK wants to open six more wholly-owned outlets by 2010, taking its Citroën Retail Group network to 15 dealerships.

The news comes after the carmaker finally filled its open point in Hatfield after searching for a partner in the area for six years.

It takes Citroën Retail Group to nine sites, turning over more than £300 million.

The new dealership on Great North Road opened this month but is still waiting for signage and will officially launch in mid-June.

Marc Raven, director of communications at Citroën, said: “It’s taken us years to find the right fit. The problem is with the south of England. It’s very difficult to find suitable areas that haven’t already been taken for housing. Land is very expensive.”

Raven said Citroën had spoken to several dealers to try and find the right partner in Hatfield.

He added: “We’ll grow at a pace that suits us and if we have an open point we think fits with Citroën Retail then we’ll take it on.”

According to the latest Sewells Franchised Networks report, Citroën has around 15 open points.

Some franchised dealers have expressed concern that carmaker-owned sites are able to sell cars at massive discount, in essence to help the manufacturer pump cars into the market.

Citroën is one of those that has been named, but Raven dismissed dealers’ claims.

“It is a level playing field and all Citroën dealers are treated equally,” he said.

Citroën Hatfield is expected to generate 500 retail and 400 fleet sales this year and 400 used cars sales.

It will also sell Citroën’s commercial vehicle range and will be the fleet centre for the group’s Citroën City site at Whitechapel, London.

Mark Ellis has been appointed Citroën Hatfield dealer principal and will lead a team of 30 staff.

There is no bodyshop on site but there are eight service bays, one commercial vehicle bay and one MoT bay.

Despite a good location, the Hatfield site has had a mixed history.

It opened as Grays in the 1980s with the Rover franchise before briefly becoming manufacturer-owned under the Phoenix Venture Holdings brand in 2004.

Most recently it operated as Moorlands, a non-franchised used car dealer, but the premises has been vacant for around four months.

It should expect a more stable future under Citroën ownership. 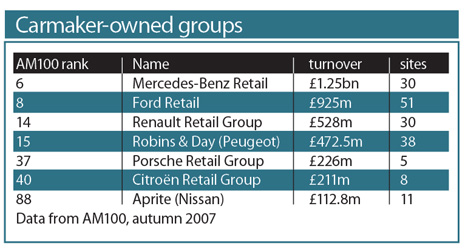 Work has already started on Citroën’s 10th dealership at its UK headquarters in Slough, an open point for eight years.

The showroom should open in September.

It would become the fourth largest carmaker-owned network (see panel).