Was this article useful?
Click the thumbs up >
For an economy apparently in turmoil, the UK car market looks remarkably serene.

The dip of just 0.5% in overall sales was much better than predicted and hardly suggests a market in imminent danger of collapse.

Indeed, Roelant de Waard, managing director of Ford UK, recently warned the industry not to talk itself into a recession.

So, if we put the macro question of the overall market to one side, what are the trends within the market?

If 2007 was the year of green talk, 2008 is the first year when buying patterns are starting to reflect these concerns.

After 20 years of buying steadily increasing larger and more powerful engines, the tide finally seems to be turning.

That may not sound a like a huge change, but it is the first reduction of any sort for a generation.

As part of the same trend, diesel growth has accelerated, rising from 38.4% in the first quarter of 2007 to 42.0% so far this year – its sharpest rise in many years. 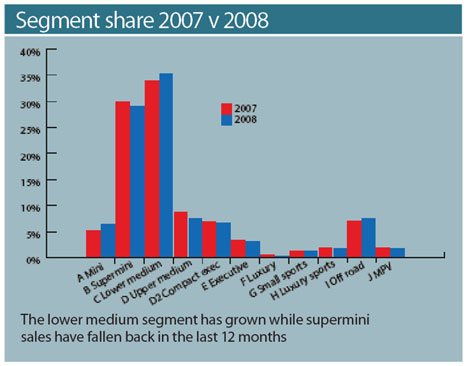 Many had predicted a petrol comeback from 2009 as more efficient small-capacity turbo engines appear, and also as the Euro V diesel regulations loom from 2010.

However, many buyers, looking for a way to get their VED bill down (and for a way to escape the London Congestion Charge) cannot wait that long.

For now, the lower CO2 outputs of diesel engines trump all other considerations. Not that this is necessarily great news for makers of small diesel engines.

More than one manufacturer has told us that profit margins on supermini diesels are close to zero and they would much rather sell petrol versions if they had the choice.

The other dominant trend in the first quarter has been the consolidation of the lower medium segment as the leading sector of the market (see table).

The gap between lower medium and supermini (now more than six percentage points) is the largest ever seen.

This may seem odd as customers might be expected to downsize into superminis, but the CO2 penalty of a lower medium car against a supermini is virtually zero.

For example, a Focus Econetic achieves 114 g/km of CO2 which is slightly better than, say, a Clio or 206 diesel.

It is very striking that customers are downsizing into lower medium models, but not out of them. 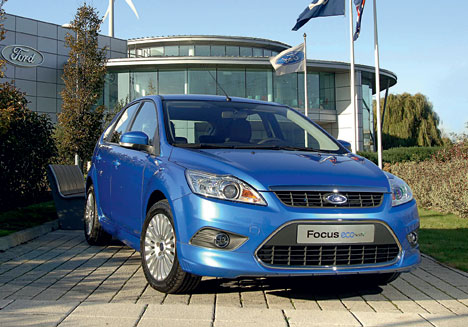