Was this article useful?
Click the thumbs up >
No sooner has Seat unveiled the new Ibiza five-door than our spies have captured its sportier cousin – the three-door SportCoupé.

Okay, it’s basically a marginally different version of the Ibiza hatch minus a couple of doors, but Seat reckons this is enough to give it a different name and image.

The three-door caught here wears disguise to put onlookers off the scent of Seat’s new baby, but it

Expect a rakish supermini with a lower stance, different rear lights and a fresh swage line down the flanks.

We’ll know for sure later this summer; the three-door Ibiza will be unveiled at either July’s London motor show or the Paris exhibition in October.

Under the metalwork lies the mechanical package of the next-generation Volks-wagen Polo.

It’s the first time that Seat has been allowed the lead role in a platform introduction; normally the Spaniards trail their German and Czech counterparts.

Those front-wheel drive underpinnings mean the new Ibiza will get the latest cutting-edge tech not normally seen on superminis.

So there’s a seven-speed DSG twin-clutch gearbox under development, lights that peer around corners and a hill-holder function to prevent roll-back on steep inclines. 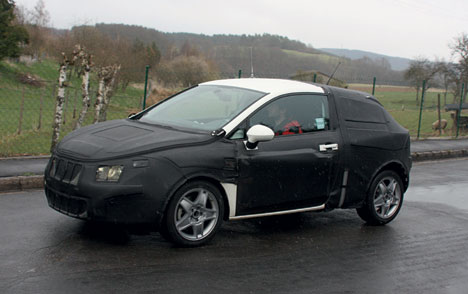