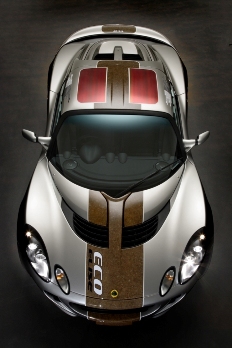 The vehicle weighs 32kg less than the standard Elise S, resulting in better fuel economy and performance with lower emissions, and features a gear change display to promote greener driving.

But Lotus has designed the Eco Elise to be more a greener car throughout its lifecycle, rather than just reducing tailpipe emissions.

Its body panels are manufactured using hemp fibres, while the interior carpets are made using sisal, a similar material selected for its durability, and the seats are trimmed in ethically produced wool.

Not only are these materials lightweight, but the hemp fibres are farmed in East Anglia and transported using a specialist logistics system aimed at reducing the carbon miles needed to transport them to the Lotus factory.

Two solar panels are fitted to the roof to reduce the strain on the engine from on-board electrical systems.

The Eco Elise is finished with a fully water-based paint, developed by Du Pont, which reduces solvent emissions, takes uses energy to cure and costs less to use.

This is expected to be available for production cars in the near future, according the manufacturer.

Compared to 2006, it claims a 14% reduction in electricity and 30% reduction in gas usage for last year, with an 11% drop in water and 57% of products now being recycled.

Mike Kimberley, chief executive of Group Lotus plc said "The Lotus brand values of lightweight, fuel efficient, and high performance are more relevant today than they ever have been.

"We are keen to ensure that Lotus as a company and its products offer an ethical, green option that appeals to our customers."