Was this article useful?
Click the thumbs up >
Just 18 months ago, Carter & Carter was a successful training company, with a £62.2 million turnover, a growing portfolio of acquisitions and 28 training and support contracts of varying sizes with vehicle manufacturers.

But following a disastrous 2007, including the death of its founder Phil Carter in May and several large contracts deciding to move their programmes elsewhere, the company’s shares were frozen in October and it went into administration in March this year.

Its spectacular – and rapid – fall from grace revealed massive debts and a business which had become increasingly reliant on banks to continue. For manufacturers with large-scale training operations contracted to Carter & Carter, the company’s demise meant finding another provider at relatively short notice.

The company had already begun to lose clients during a troubled 2007.

But many of its biggest contracts were still in place in March as the company went into administration.

Although some manufacturers moved their training in-house, smaller training companies have grown after taking on former Carter & Carter schemes.

Several passed to VT Group, which picked up contracts for the large-scale Volkswagen Group training programme and Subaru, plus some business from Renault.

Changes have been minimal; training is provided by ex-Carter & Carter employees from the existing facility in Ruddington, Nottinghamshire. Volkswagen has around 800 apprentices on the VT course.

During this time, other smaller providers covered for the workload formerly handled by Carter & Carter.

The company is responsible for managing and delivering training for mechanical and electrical engineering, including light and heavy vehicle repair, fast-fit, vehicle body repair, refinishing and body fitting.

Ford is measuring the quality of service provision against a new performance agreement which will be reviewed monthly.

The collapse of Carter & Carter illustrated the potential problems for manufacturers outsourcing large parts of their training programmes to a third party.

Over the past year, some have begun to move their entire apprenticeship schemes and training in-house for more control.

General Motors, Citroën, Peugeot and Toyota – all ex-Carter & Carter clients – have taken control of a substantial portion of their training arm.

Though they all still outsource to a third party, it is a much smaller share.

Mercedes-Benz has taken this to another level.

It had used Carter & Carter until the company went into administration, but was planning to move the operation in-house.

The manufacturer will now run its entire training programme in-house, opening a new centre near its headquarters in Milton Keynes for the 532 existing apprentices, and 90-150 admissions each year. On completion of the 40-month programme, apprentices will be given certificates by Mercedes-Benz.

All qualifications are recognised by the IMI.

The scheme is run in conjunction with the Learning and Skills Council, and Stephenson College in Coalville. The centre will open within the next two months. 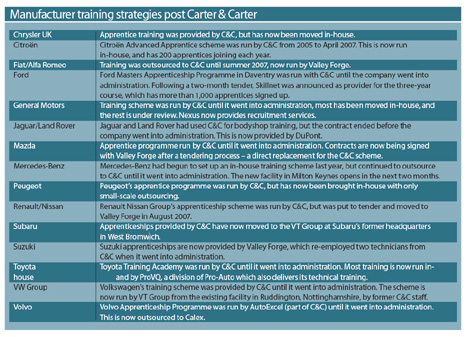