Was this article useful?
Click the thumbs up >
Over the past decade, 1,200 franchised dealers have exited the market. Many were owner-driver, family-based dealers who were driven away by the relentless surge of the plc and large regional groups.

Some converted to used car sales, a few to aftersales.

Others sold up and took early retirement.

As established carmakers look to team up with fewer retail partners, while up-and-coming marques try to attract large groups into the fold, will this trend continue?

In short – is there a future for the single site owner-driver?

According to Daihatsu, the answer is an unequivocal yes. It’s planning to grow and its strategy is based firmly around a network of owner-drivers.

Look up the phrase ‘fringe operator’ and there ought to be a picture of Daihatsu.

Even its UK managing director, Paul Tunnicliffe, describes it as an “unfashionable” brand.

The company has now set out ambitious plans to double sales to 10,000 within four years (0.4% market share) – still with a focus on private buyers.

This growth is being driven principally by Daihatsu’s head office in Japan rather than IM Group, which has had to accept lower margins to incentivise dealers to raise volumes.

“I have to balance the needs of my IM bosses and my Japanese bosses,” Tunnicliffe says. “But both are very supportive.”

Those target numbers might never trouble the likes of Japanese compatriots Honda and Toyota, nor European carmakers like Peugeot and Renault, but for a niche operator and its owner-driver network, it is a significant step forward. And it is only a first step for Daihatsu – new growth targets will follow. 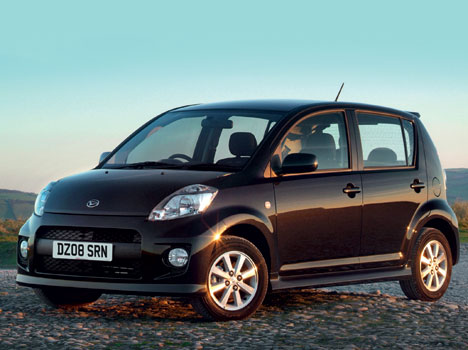 #AM_ART_SPLIT# For now, the challenge is to create consistency across the 125-strong retail network.

Daihatsu set out its stall by giving every dealer the same target for the first quarter – sell 20 new cars and get an extra 2% margin on top of the standard 10%.

Any dealer selling 25 received 14%. Oh, and demonstrators (most dealers will register at least four) counted towards the target.

The second-quarter target was 15 cars; Q3 has yet to be decided.

However, the four quarter targets will add up to 75 cars, intended to bring the network average up from 45.

It doesn’t take a mathematician to work out that if all 125 dealers hit the numbers, registrations this year would top 9,300. Daihatsu’s actual annual forecast for 2008 is 6,000.

The big leap in registrations will happen in 2010-11 when Daihatsu gets a number of new products, including the Sirion replacement.

By then the company will have established a network of 140 dealerships.

Eight have joined already this year and Daihatsu’s three field-based dealer development staff are in talks with up to 40 prospective candidates.

Key open points are as diverse as Edinburgh, York and Crawley.

“We appeal to used car operators who are looking at their first franchise and dealers whose previous franchise had become demanding on the level of investment it wanted,” says Tunnicliffe.

Sirion Designed more for European tastes, the new Sirion will arrive in the UK in time for the March plate change in 2010

K-Cars These Japan-only cars are powered by 660cc engines that are not Euro IV-compliant. The next generation is expected to be Euro IV, possibly Euro V, and IM Group is looking at several models for the UK. That is still a couple of years away.

AM Poll
What is your take on the car retail sector's ongoing vehicle supply shortages? Please leave a comment
Vote
View all
3303