Was this article useful?
Click the thumbs up >
n the face of it, the powered two wheeler (PTW) market, which includes mopeds, scooters and motorcycles, hasn’t made much progress over the last five years.

The market seemed to level off in 2005 with a less than 1% slip, and it bounced back in 2006 with an increase that compared favourably to the 3.9% drop in the car market.

Last year was even better, with an 8.6% increase outperforming the car market and taking the total to almost 144,600 – the biggest increase in seven years.

David Taylor, chief executive of the Motorcycle Industry Association, says there are opportunities for the market to grow even as consumers feel the pinch.

He adds: “When the baby boomers hit their teenage years, motorcycle license holders made up 25% of the male population. It’s only 13% now, so there’s an opportunity for growth.”

Around 3.5 million people in the UK have motorcycle entitlement on their driving licences.

However, only 1.6 million are actively using a motorcycle or moped. A third of their annual journeys are for leisure Traditionally, sports bikes have been the mainstay of the UK market, accounting for a third of total sales.

In recent years, Chinese manufacturers have made a significant impact, mainly with smaller-engined machines at the lower price levels. Chinese brands have been particularly popular with learner and novice riders.

But social and legislation changes also seem to be coming into play.

In recent years congestion charges, combined with the misery and expense of commuting by car and public transport, have seen a definite move towards the kind of bikes that can be used everyday as well as for a Sunday blast.

So the market has seen increasing demand for naked, custom and touring bikes rather than race replica, big-engined power machines. 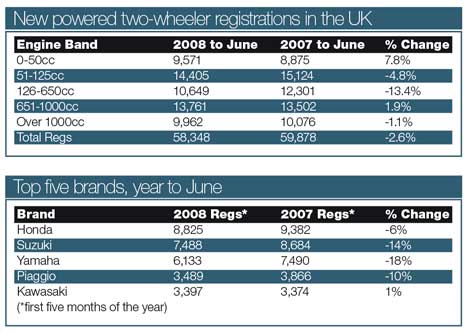 #AM_ART_SPLIT# But the biggest growth last year (32%) was in the adventure sport category, with the BMW R1200GS perhaps benefiting from the Ewan McGregor and Charlie Boorman effect.

These bikes are truly multi-purpose.

A further indication of a trend towards bikes for everyday use and commuting is that PTWs with engines of 51 to 125cc took the biggest share of the market last year.

Rocketing fuel prices, taxation on cars and the difficulties and expense of parking should also encourage people to use PTWs – not necessarily instead of a car, but certainly in place of one for commuting and short trips.

The Motorcycle Industry Association is campaigning to get people to take their bike test ahead of changes later this year.

Increases in the numbers taking tests suggest that the ‘Now’s The Time’ campaign is having a positive effect. From October, the number of motorcycle test stations will be reduced from 200 to around 60.

The test will then be more expensive and demanding.

The flip side is that the industry is concerned that more complex, time consuming and expensive testing will have a negative impact on the market. So far, it’s too early to tell.

The first few months of this year signalled a healthy market with January up, February and March pretty flat and April sales soaring by more than 10%.

But a 13% dip last month perhaps signals that the economic reality of Brown’s Britain has caught up with the bike market.

Nevertheless the market ended May just 2.6% down on last year with the adventure sport category continuing its upward trend by 16.2%.

Moped sales increased by more than 47% in May and are almost 21% up over the first five months. 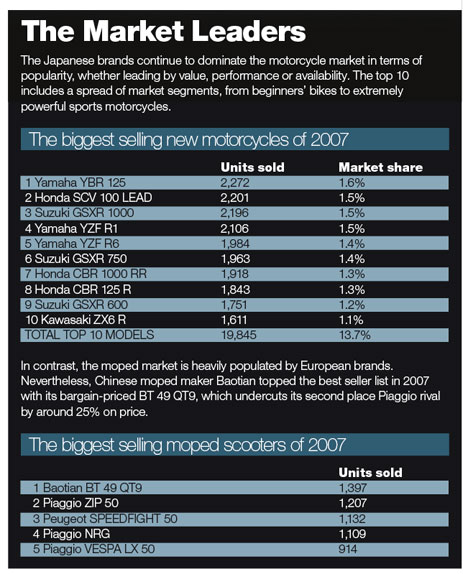