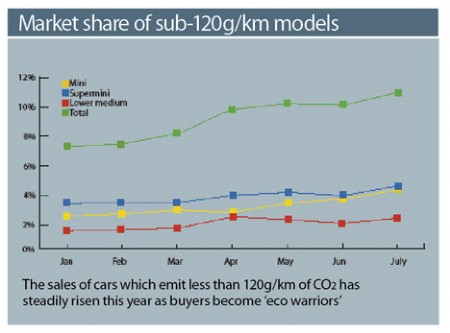 With concern about personal finances now at the top of everyone’s agenda, it may seem odd to say that British drivers have become eco-warriors – except that ‘eco’ now refers to “economy” not ‘ecology’.

The proportion of cars sold with emissions under 120g/km is rising at an unprecedented rate. Normally we show sales trends year-by-year, but this one can be demonstrated month-by-month (see table).

Market share has risen by one percentage point every two months so far this year – when was the last time
any class of vehicle grew at that rate?

It is striking that the growth has been fairly evenly spread across the three segments in which such cars are available: city cars, superminis and lower-medium models.

Hence, it is not a question of people downsizing into smaller cars to reduce their fuel bills and carbon footprint.

Instead, they are looking for variants which offer better figures – for example, the second-best selling sub-120g/km model in July was the Ford Focus TDCI – no one’s idea of a small car.

So far this year, the best-selling model in this category has been the Ford Fiesta which, again, is hardly the smallest car you can buy.

Underlining the point is the fact that the third-best selling lower-medium model is the Audi A3 1.9 TDIe, which is outselling the sub-120g/km Renault Megane and Citroën C4.

This presents the car industry with a problem as well as an opportunity.

If the sub-120g/km models are presented as economy models, the list prices will have to be lower.

As the proportion of ‘eco’ sales rises, that means profits will fall. Hence Ford’s decision to position its Econetic trim level
slightly above Zetec, or more than halfway up its range hierarchy.

The message is that eco versions will save buyers on running costs, but that exceptional fuel efficiency has an upfront cost.

With sales figures for such models rising – Volkswagen now sells 3% of its range as Bluemotions – the car manufacturers cannot be caught in the situation where consumers associate reduced fuel consumption with reduced prices.

In the medium term, up to 10% of mainstream sales are likely to come from the eco trim level (and they will nearly all have an eco sub-brand). Pricing them right will be crucial.