Volkswagen has just shown the new Golf – and this will be next year’s range-topper – the sixth-generation GTI.

AM’s latest spy photo reveals the muscular hot hatchback on a shakedown test in the US ahead of a formal show unveiling in 2009.

As with the whole same-again Golf range, the Mk6 is barely any different to today’s Mk5 at first glance.

The GTI will be no exception. It doesn’t take a pair of X-ray specs to see that the fastest Golf will differ little from the current model.

What we can see are a pair of new exhaust pipes on either side of the rear valance (like on today’s R32), pronounced side sills and more scoops on the front spoiler than served up by an ice cream van on a hot summer’s day.

All the better to cool the GTI’s highly tuned 2.0-litre engine. 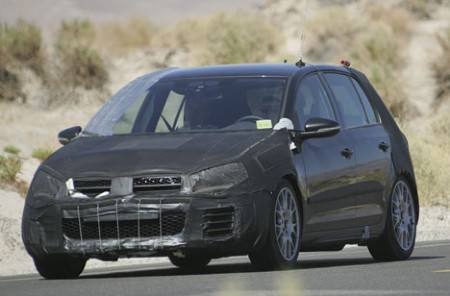 It’s a revised four-cylinder unit breathed on by a turbocharger to massage the power output upwards from today’s 197bhp.

The 2009 GTI iteration is said to produce 208bhp and – more important for overtaking – 258lb ft of torque, available from an admirably low 1500rpm.

With more grunt and a similar kerb weight to today’s Mk5 GTI, the new hot hatch should be good for 0-60mph in around 6.5 seconds.

But it’s not all about performance; VW is targeting emissions of around 150g/km and combined consumption approaching 45mpg – impressive figures for a GTI.