Vehicle manufacturers’ captive finance houses have achieved a record finance market penetration of 84%, up from a penetration of around an average of 80% recorded in the past decade.

But with more proposals being turned down due to tough lending criteria, 95% of dealers - the second highest ever percentage - are utilising a secondary finance house for new car business, according to the latest Sewells New Car Finance House Survey.

The survey results also suggest average franchised dealer new car finance penetration has increased substantially to 52%, from 45% in the 2008 survey.

John Maslen, Sewells’ brand director, said: “Rising point-of-sale new car finance penetration may be due in part to the consequences of the credit crunch halting the rise of direct lending in the motor finance market.

“But equally, it may be a result of increasing professionalism in dealerships with dealers and their suppliers working together to reverse a persistent decline in showroom car finance sales.”

The research found that more and more dealerships are employing finance specialists with those employing F&I managers enjoying an average new car finance penetration of 54%, whereas those without averaged 47%.

Based on responses from 832 franchised dealers covering 51 franchises and 1,197 franchise outlets, the 2009 Sewells’ survey shows the quality of service provided by finance houses to their dealer intermediaries remains the major influence on dealer satisfaction.

Service-related issues accounted for four of the top 10 dealer priorities in the 2009 survey, down from five in 2008 and eight in 2007 – but they were still the top four satisfaction factors.

The highest dealer priority was the speed that finance houses turned around proposals.

The latest survey also shows a year-on-year increase in dealers saying that the credit crunch has had a negative effect on customer enquiries for finance – for 40% of dealers polled in August 2009, compared with 30% a year earlier, when car sales had just entered free-fall.

The New Car Finance House Survey 2009 also explored franchised dealers’ views on acceptance of proposals and compared the results to an identical question asked in August 2008 and November 2008.

In August 2008, 42% of franchised dealers polled said acceptances were down.

This increased dramatically to 53% in November 2008, however the latest position (August 2009) is similar with 54% saying acceptances were down.

Dealers views on the acceptance of finance proposals

The following chart summarises the franchised dealer results of the following question asked in three consecutive Sewells’ Finance House Surveys: “Thinking about the ‘credit crunch’, has it affected the percentage of proposals your finance houses accept/approve compared to last year?” 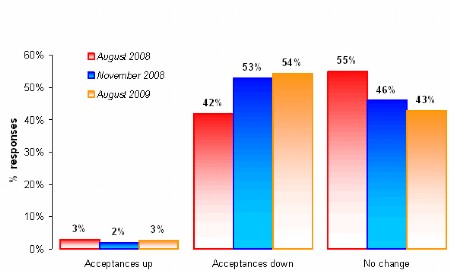 AM Poll
How has the COVID-19 pandemic affected your attitude or mental health? Please leave a comment
Vote
View all
2644