The Society of Motor Manufacutrers and Traders  is highlighting the environmental benefits of the scrapapge scheme with new figures that show the average carbon dioxide of cars registered at 132.1g/km.

The average CO2 emissions of old cars scrapped through the scheme is estimated to be 181.9g/km (based on weighted segment data for 1997 vintage cars, average age of scrapped vehicle being 12.6 years).

"Not only is it helping to reduce average CO2 emissions, but it is putting safer vehicles on our roads. The scheme should help to sustain demand into 2010 and have a positive impact on UK manufacturing and new car registrations during the first half of the year."

Petrol cars account for 85% of cars bought through the scrappage scheme, a higher proportion than in the overall market between May and September. 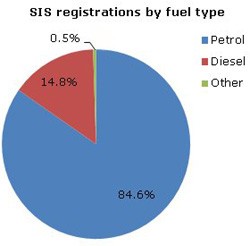