As you are very unlikely to have missed, used car values have been rising throughout nearly all of 2009.

With the exception of January and February book values have been driven up each month as the market has gradually recovered from an economic downturn that sent car values plummeting from half way through 2008.

Much of this recovery has been attributed to short stock supplies, which in turn has forced dealers to clamber over one another to get the best stock, thus forcing prices up.

As this column has explored previously, a significant factor in the reduced stock levels is the reduction in manufacturer forced registrations, along with a reduction in the number made available to short cycle business, such as Rental companies and Body Shops, have meant less nearly new cars have been available in the market.

Even the government’s Scrappage scheme which has been seen as a saviour to the New Car market has had little impact on stock levels in the used car market. The number of older plate cars available has been reduced due to customers taking advantage of scrapping their old used car for a brand new one which ordinarily would have entered the lower ends of the used market.

Examining October book values for selected core models over the past five years helps illustrate the scale of recent rises in value and lends weight to the argument that perhaps recent months has seen values rise to what could be unsupportable levels.

To help illustrate this, Chart 1 shows the underlying depreciation seen in 3yr60k values in CAP Black Book since January 2005. As can be seen, the depreciation curve has fairly consistently followed the linear trend-line, until the second quarter of 2008, where the used market downturn sees the curve significantly below trend.
However, since May 09 the recovery in used values has seen the depreciation curve rise significantly above the linear trend-line, suggesting the market is particularly ‘hot’ at the moment, and that caution should be used if using current used values in any asset, risk or provisioning analysis.

The used value of the Ford Focus is a prime example of how prices have risen extraordinarily this year with the 3yr36k 1.6 Zetec Auto 5dr Hatchback valued at £5,775 a 16.1% increase on the value of the same aged car in October 05 and October 06 (when the values were equal).

However it should be pointed out that the ‘over recovery’ of values has had some dependency on the sector, as the smaller more affordable and more in demand cars have increased the most.

The Small Executive sector values have not recovered as much with the Mercedes-Benz C-Class and BMW 3 Series around the same values as previous years with the obvious exception of last year when values effectively reached their lowest point. In a similar vein the Honda CR-V 2.0 i-VTec SE Estate in the 4x4 sector was valued 34.2% higher than in 2008 but was still 11.6% lower in value than in October 2005.

As we enter October 2009 overall used car values are beginning to show the first signs of reaching their peak and with the coming months it is predicted that values will begin to fall again.

More recent Dealer feedback has began to show stock levels are beginning to recover though perhaps not more than would usually occur at this time of year. However considering the previous stock shortages over the last few months this could contribute to greater pricing stability.

Of course many in the industry may feel this end to price rises is overdue with nearly new used values showing signs of becoming too close to new car prices, especially with the current discounting and recent news that the scrappage scheme will continue. Who wants to buy a nearly new car if with discounting a new car can be bought for the same price?

Used values should fall in the coming months to Christmas as stock levels increase and demand begins to drop in line with the seasonal trends expected at this time of year. However the likely decreases in value are not expected to have any where near the same impact as last year but this could prove to be the sort of calming influence that is required after a hectic last two years for the used car market. 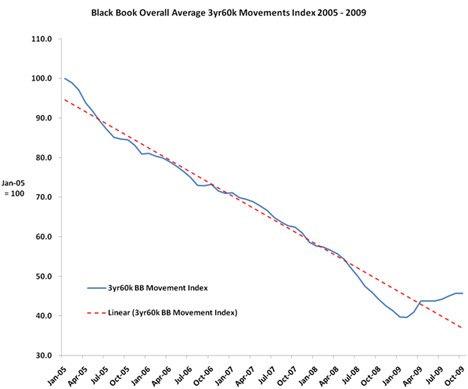