Regular readers will be well aware of the unprecedented rise in used car values across 2009, along with the widespread belief that they reached a plateau in October’s Black Book, and that the market would return to a more normal, seasonal pattern this month.

Indeed, there is evidence that current residuals have over-recovered to a level that is possibly unsustainable.

Typical seasonal value changes into November’s CAP Black Book are an average -2.0%. This month’s book movement is -3.0% at 3yr/60k.

Is this the beginning of a market correction due to overvalued cars, or just a reflection of the usual seasonal slowdown effects of winter approaching?

Prior to November, the signs were very much seasonal, where on the back of a new plate change, the 3yr/60k values changed by a minimal average -0.1%, a reasonably level trend.

The usual seasonal expectations would be to see an increase in used depreciation as retail customers cut back and delay big ticket purchases in preparation for Christmas.

Couple this with a struggling economy, high-profile strikes, murmurs of a “winter of discontent” and used car values at an all time high and it would be no surprise to see more retail customers than usual put off a used car purchase until the new year.

After reduced levels of short-cycle and pre-registrations there are signs these are beginning to increase.

This will increase the levels of late plate stock.

Manufacturers are beginning to revise their cautious approach to short cycle deals and pre-registrations.

Evidence suggests many dealers are well stocked, meaning many have no need to re-stock.

With increasing availability of quality stock the signs are that dealers and traders are being much more selective with their buys.

This has had a clear impact on the leasing companies conversion rates, which have dropped 15% to an average 75%.

These additional factors have seen November’s book movement decrease more than would usually be expected.

Examining sales data for October (see chart), there is a clear pattern of decreasing % CAP performance as the month progresses, with 2006 56 plate disposals achieving on average 98% in the first week, which has dropped significantly by the end of the month to between 92% and 93%.

If October’s downward trend continues into November, Black Book values may see further drops beyond typical seasonality, although this is clearly dependent on the levels of speculative buying in November, particularly as those buyers not currently in the market may return to buying. 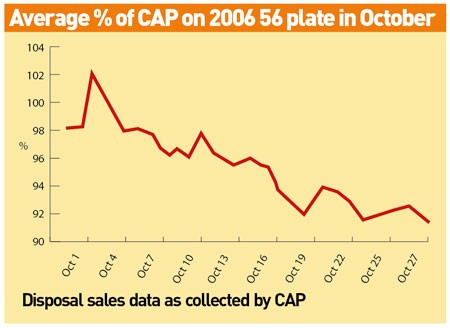