A further point also came off the CAP comparison, which now stands at 94.45% of Clean figures.

Values remain well ahead year-on-year by £1,080 (22.3%), although as prices were beginning their recovery 12 months ago, it is likely that this figure will reduce in the months ahead.

BCA’s communications director Tony Gannon said “With this slight slowdown, the marketplace appears to be resuming a more typical pattern of activity.

"In previous years, September was often a peak in the annual price cycle, with values falling slightly in the following months of October and November and that is exactly what has happened this year.”

Volumes of fleet/lease and nearly new cars sold in November were broadly in line with those seen in October, although there was a fall in P/X volumes – perhaps reflecting the more difficult retail picture being reported by dealers.

Nearly-new values decreased by £2,191 to £16,969 (down 11%) - although there was a shift in model mix away from higher value premium models that will have had an effect.

Factor in the average 2% drop recorded across all sectors and the part-exchange sector has outperformed the market by 4.5 points.

The continued demand in this sector shows that there are plenty of motorists still needing budget-priced transport.

This represented a 6.0% fall and followed a 3% fall recorded in October.

Performance against CAP Clean fell for the fourth consecutive month, losing over a point to sit at just over 94% - the lowest CAP comparison this year.

Dealer P/X stock values recovered well in November, despite the slightly softer marketplace and good volumes available from other sources such as the fleet & lease operators.

Demand in this sector remains very strong and underlines that for many motorists on a tight budget, a six-year-old, 80,000-mile car is an attractive, affordable proposition.

The relative shortage of P/X cars compared to October may well have been a factor in the increase in average value.

Looking at P/X product in detail, the recovery in value was seen in the budget, volume and premium car sectors.

For clarity, the start value, low-point and last three months are shown only. 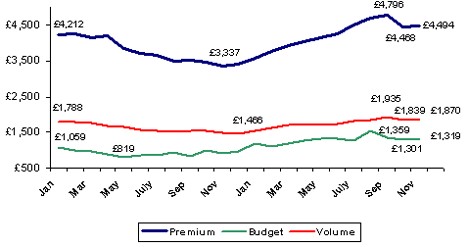 November saw the first fall in nearly-new values since April 2009, as £2,191 came off the average value in a month.

The substantial 11% fall will in part be due to a shift in model mix away from higher value premium models.

The average CAP performance continued to fall, dipping below 100% of Clean values for the first time this year.