Used stock at English Ford in Poole was damaged when an out of control Renault Clio slid into its van display. 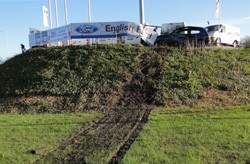 The dealership was rammed by the Clio after it slid across a roundabout on the A35 Dorset Way then continued carving a path over a grass verge before skating up a 10ft bank where it was brought virtually to rest by the security hoops before striking the back of a Ford Transit van.

Tom Croft, group sales manager for Foray Motor Group, parent company of English Ford, said: "The accident happened in the middle of the night and it’s amazing no other vehicle was damaged during the Renault’s 100 yard slide. 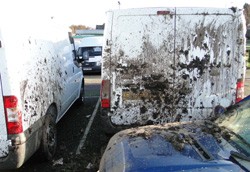 "The Transit van, a used vehicle waiting to be sold, suffered only minor damage but it was enough to break the valeters’ hearts because it was spattered with mud, as was the van next to it."

The crashed car was abandoned and Croft joked: "It’s fair to say the Clio wasn’t looking too healthy either, but if the driver would care to come back maybe we could do something for him under the scrappage scheme."