Will values increase as demand rises?

2008 could be considered the used car market’s ‘annus horribilis’. The previous year saw record levels of new registrations and a buoyant used car market which was reflected in CAP’s measure of year-on-year three-year/30,000-miles price movements; down 5.4% between December 2006 and December 2007.

The 5.4% drop perfectly illustrated one year’s life-cycle depreciation. The contrast with 2008 is pronounced.

The equivalent price movement was down 20.9%, almost a four-fold increase in depreciation with three-year-old values in 2008. 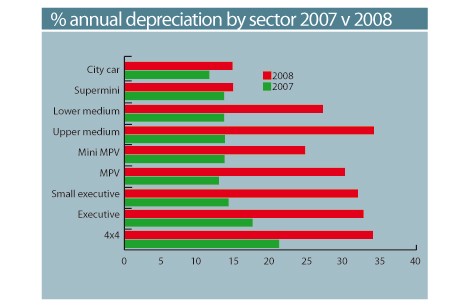 So what went wrong? Well, the credit crunch, banking crisis and the resulting onset of recession came at the same time as the hangover from unsupportable levels of pre-registration and the July peak in fuel costs.

These coincided with fundamental shifts in buyer behaviour to severely diminish the level of demand in the used market. Confidence dropped, buyers flocked from the used car market and stock levels rose and values plummeted.

Hardest hit were the larger vehicles, with the 4x4, upper- medium and executive sectors, all reaching depreciation levels of more than 30%.

The 4x4 sector was the first to feel the effects with depreciation, accelerating from January 2008 onwards.

The executive sectors followed in the first quarter and the other sectors from May.

Despite widespread caution throughout the industry, this year has so far exceeded expectations.

Conversion rates in late 2008 had dipped to around 60% and the percentage against CAP achieved at disposal in December hovered around the 90% mark for 2005 to 2008 plates.

January, however, saw conversion rates significantly increase, with 05-08 disposals achieving 97.6% CAP, as well as seeing a continuation of a resurgence in 4x4 values.

The values had dropped to a level that spurred activity as buyers weighed up how much car could be bought for their money. BMW’s petrol X5 saw values increase by around 5% into February, no doubt helped by 2009’s fuel prices.

At the other end of the scale, superminis were one of the only sectors where residuals stayed relatively buoyant throughout last year February also saw average supermini values rise, although by a modest 0.7% for one and three-year-old models.

Standout performers were petrol Vauxhall Corsas, up around 5%, and the Mazda 2 and Fiat Punto, increasing by around 4%.
Early indications are that disposals this month are even stronger than January, as what is becoming a significant shortage of used stock begins to take effect.

Near 100% conversion rates and heavy buying activity mean average disposal values can be significantly over CAP Clean, potentially paving the way for sizeable increases in guide values. It may be premature to view this as a recovery, though this analyst will be watching developments very closely.

“This campaign is a step in the right direction in helping to restore customers’ buying confidence. Black Horse dealers can further help to stimulate sales by giving their customers access to credit at the point of sale.”

“This campaign demonstrates to the consumer that now is the best time ever to make a car purchase. Users of DMS’s system – Navigator - can use the system to assist in targeting this message to existing and new dealer prospects”

BCA is delighted to support the 'Buy a Car campaign'. As the UK's largest vehicle remarketing company, healthy new and used car markets are critical to our business and the myriad others that service and support the car retail and wholesale sectors.

But more than that, new and used car sales combine to make a sizeable contribution to the UK's economic well-being. Thanks to this and similar campaigns, motorists are becoming increasingly aware just what good value deals are out there for them to enjoy.