The vital March market for new cars should be helped by a delay in price rises reaching showrooms.

Industry hopes are pinned on a stronger sales performance when the 09 plate arrives after January fell almost 31% year-on-year. February’s market looks weak, as in the best of years.
Dealers do not expect Ford and Vauxhall to implement the announced rises before April.

Robert Forrester, chief executive of Vertu Motors, which has 14 Ford dealerships, said: “Most manufacturers will have to raise their prices because of the pound’s weakness.

“But they have enough stock in the market to delay this until after next month. One issue in March is whether retail buyers will be attracted back to buying new cars because the market for used cars has been so strong. The other is the transaction price when new cars are sold.” 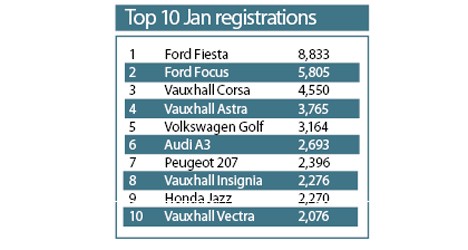 Ken Savage, Perrys Group chairman, said his company was trading better than the overall market, and making money, though less than in the past: “I expect the first quarter of the year to be extremely difficult for new car sales. We have the Jaguar franchise, and it was one of the few to see a rise in January – our used car sales were also up year-on-year.”

The SMMT says retail sales fell less last month than in the fleet sector. This might have been because of the VAT reduction, but the start of the retail decline in January 2008 was more likely to be the reason. This year’s registrations total is likely to be 410,000 units below last year’s and almost 685,000 down on 2007.

Renault did worst among major brands, with its sales plunging virtually 60%, and there were falls for Citroën (nearly 41%) and Peugeot (just over 35%).

A Vauxhall spokesman said of its price rise of just under 5%: “We didn’t want to increase prices at the moment but we have to be sustainable as a business. Vauxhall has to react now – if we don’t, we will be worse off. Astras built in the UK are affected by sterling because of imported components.”

The Vectra and 6.0-litre VXR8 are excluded from the increase. Vauxhall has not yet been able to clear out Vectras and the model was last month’s 10th best seller.

The Insignia, its replacement, was eighth, with 2,276 registrations.

The Mondeo was not in the list, but Ford led, with Fiesta the comfortable leader, followed by the Focus.