Aston Martin’s most powerful production car will be unveiled at the Geneva Motor Show on March 3.

The original V12 Vantage concept was unveiled to guests at the opening of the Aston Martin Design Studio in December 2007. Aston Martin engineers have brought the V12 Vantage to market in just 12 months.

Dr Ulrich Bez, Aston Martin chief executive officer, said: “This is the ultimate performance interpretation of the Vantage range, combining our most agile model with our most powerful engine.

“This also illustrates one of Aston Martin’s key strengths – the ability to act quickly and turn concepts and ideas into reality.” 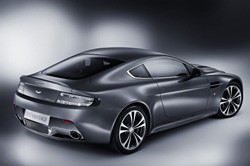 The V12 Vantage will be built at Aston Martin’s global headquarters in Gaydon, Warwickshire joining the DBS, DB9 and V8 Vantage model lines.

Production will be limited to between just 300-500 examples per year. Deliveries of the V12 Vantage are expected to commence during Q3 with prices to be confirmed at the Geneva motor show.