Ssangyong will be showing an almost production-ready example of its new C200 crossover SUV at the Seoul Motor Show in South Korea on April 2. 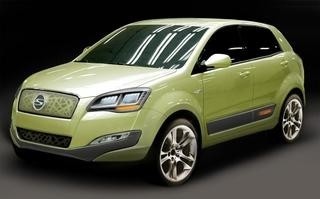 The company says that the C200 unveiled at the show will closely resemble the production version scheduled to be launched later this year.

The C200 concept was first unveiled at the Paris show last October and is the first new model in the broadening of the SsangYong range. It is similar in size to a Toyota Rav4, Honda CRV and a Nissan Qashqai and with a 2,640mm wheelbase, is slightly longer than a Volkswagen Tiguan.

The C200 will feature a new diesel engine which has been designed to have low noise levels and reduced vibration. It produces 175bhp and complies with Euro V exhaust emissions requirements. Manual and automatic transmissions are likely to be available in the UK, with the show car having a six-speed auto.
Work has already started on the production line for the new car, ahead of schedule.

The diesel hybrid Kyron has a direct injection diesel engine, with a high-voltage battery supplying electric power to the electronic motor.

Last year SsangYong said tests had shown improvements in fuel efficiency of around 25% in comparison to existing vehicles of the same class. In terms of emissions, there was a reduction of approximately 10% in nitrogen oxide and 15% in particulates.

AM Poll
Will new car supply be restored to normal levels in 2022? Please leave a comment
Vote
View all
2624