Vauxhall has revealed details of its electric Ampera car which it has confirmed will be sold in the UK. 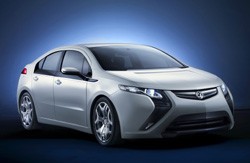 For journeys up to 40 miles the Ampera runs on electricity stored in its 16-kWh lithium-ion battery and emits no carbon dioxide emissions.

The Ampera can run on electricity produced by its own on-board engine generator which GM says can extend the range to more than 300 miles.

Production of the new electric vehicle will start in 2012.

The Ampera can be plugged into any household 240V outlet for charging. GM Europe is analysing the requirements of a recharging infrastructure for plug-in electric cars with energy companies, including Iberdrola of Spain, parent company to Scottish Power.

“The Voltec electric propulsion system is the kind of game-changing technology the automotive industry needs to respond to energy and environmental challenges.”