There are 261,457 Mitsubishis currently registered in the UK, representing 0.695% of UK registered vehicles and making it the 24th most favoured car brand.

It is predominantly a retail brand, with only 9.28% recorded as company cars. Males make up the bulk of its retail ownership, with females registered owners adding up to only 25.99% of its parc.

As a brand which was built on the reputation of its SUVs and pick-ups, unsurprisingly 33.56% of its parc is large 4x4s and its flagship Shogun SUV is its most successful model.

At the other end of its line-up, the Colt supermini occupies 18.83% of its parc. Its current family car, the Lancer, represents 6.73% of all UK Mitsubishis, while its now ageing predecessor, the Carisma, represents 13.29%.

The fact that 67.36% of all UK registered Mitsubishis are four years old or older hints at an opportunity for dealers to target owners of older models with a value-driven aftersales offer.

Top locations to find Mitsubishi owners are Birmingham, Gloucester (also the area where Mitsubishi UK is based), Sheffield, Bristol, Chester, Exeter, Nottingham, Peterborough, Swansea and Manchester. However, none exceeds a 3% share, hinting at a widely fragmented customer base. 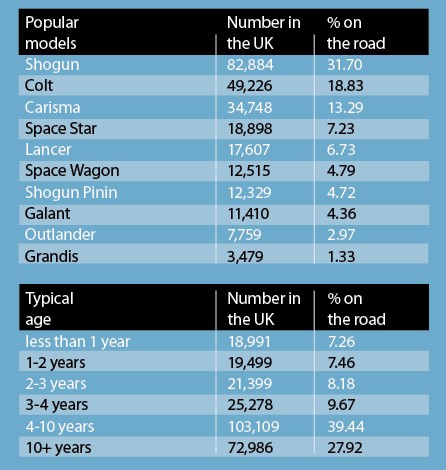