AM Index: Market appears to have reached peak

Press coverage of the used car market has been peppered with superlatives, as exceptionally high demand coincided with a general shortage of stock.

January through to March saw record conversion rates at most auction and disposal centres, with three-year-old cars’ average performance against CAP breaking the 100% mark and climbing to 106.5% in March.

The strength of March disposals resulted in a record average price movement in April’s Black Book of 6.8%.

There was much speculation as to whether such an increase would have any unintended effects.

The chart confirms that the market easily absorbed this increase, with April’s three-year-old disposals achieving an average 99.1% of the increased April Black Book values, suggesting that values had been correctly aligned.

Behind the recent market strength there have been pronounced sector trends. The larger vehicle sectors, in particular 4x4, large executive and upper medium
continue to outperform and recoup some of last year’s unprecedented depreciation.

In the executive sector it has been the marques most affected by the downturn that have recovered most, such as Saab, Volvo and Jaguar.

Smaller cars, such as superminis and city cars continue to be sought after and have been immune to recent market trends.

Because they depreciated at a normal seasonal rate throughout 2008 there has been no discernible ‘dead cat bounce’ this year.

Both the large and mini MPV sectors have moved by an average half percent into May’s book, which equates to an average drop of only £30 on a £6,000 trade value.

The Renault Espace introduced in 1986 was the model that brought the MPV sector to the mainstream.

Typified by variable seating capacities, which can often be configured by the owner, along with higher seating positions and innovative storage capabilities, MPVs are now among the cars of choice for buyers favouring practicality over prestige or image.

Recent market performance, however, has been dependent on size as manufacturers move away from the larger to smaller models.

Models such as the Vauxhall Zafira occupy a middle ground as regards size, with models like the Nissan Note representative of the mini MPV sector, which is out-performing the larger models.

For the year to date, mini MPV three year-old values have increased by an average 13.9%, compared to 8.2 % for the larger MPVs.

Following the remarkable first four months of the year, signs are that the market has reached its peak.

This would suggest that this month’s disposals may very well cause values to return to a more normal seasonal decline. 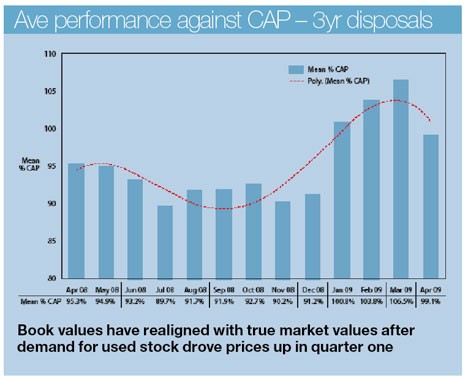