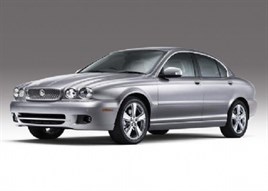 In ancient Sparta, new- born male babies were left outside overnight – the strong grew up to be warriors and the weak perished.

The current market seems to be having a similar effect on car manufacturers, with some stoically enduring the harsh conditions and others appearing close to death.

Among the stoics must be numbered the Koreans, whose sales have fallen much less than average, thanks to a combination of improved models and a principal currency as sickly as the pound.

Jaguar is enjoying an unaccustomed period of market share growth as the XF continues to do good business, but the medium term trend will be downwards as the X-Type approaches its demise.

Among the volume manufacturers, Toyota and Ford are doing less badly than average, while niche player Smart is coming of age as a way of downsizing with style.

At the wrong end of the table, the identity of the sickly babies is not a surprise, but their closeness to death may be.

The Chrysler group was down 78.6% in the first quarter, registering just 1,214 units across three brands.

IM Group had the unwanted distinction of having two unrelated brands in the bottom 10 –both Subaru and Daihatsu were down by more than half.

Mitsubishi is looking vulnerable, while Proton is losing its only conceivable justification – what is the point of a low list price when far bigger players are offering great deals and better residuals?

Among the volume players, Renault sales are down over half to just under 15,000 cars this quarter. That barely merits the term “volume manufacturer”.

Renault will point to an inevitable lull before the new and much improved Megane gets into its stride, but the worrying fact is that all its other models are fading – even the city car Twingo, which should have benefited from downsizing.

Finally, the dogs that did not bark. Porsche deserves credit for keeping its sales fall to around the market average, while even Land Rover has contained the sales drop to some extent (although what the current incentives are doing for their margins is another matter).

Its task now is to persuade buyers that the new stop-start Freelander is the SUV for the modern age. 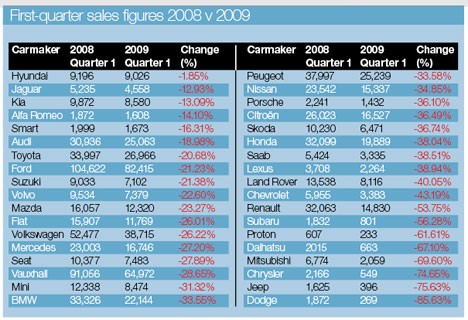