The Rolls-Royce Ghost will be powered by a new 6.6-litre turbo charged V12 engine which will produce 563bhp and hit 0-62mph in 4.9 seconds. 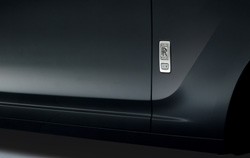 Maximum torque out put is 575 lb ft at 1500 rpm. There is no official word on carbon dioxide emissions or a combined mpg figure.

Customer deliveries of Ghost in the UK and Europe will begin late this year with pricing from £165,000 excluding taxes and delivery charges.

Customer deliveries in other markets including the USA and Asia Pacific region will begin from the second quarter 2010.

Pictures of the model haven't been released, but Rolls-Royce has shown some small sneaks at the exterior of the new model.

The new model will be unveiled at the Frankfurt Motor Show in September and will feature an eight speed automatic ZF gearbox and a limited top speed of 155mph.

Helmut Riedl, Rolls-Royce director of engineering, said: “First and foremost Ghost is a Rolls-Royce. This means that despite its performance figures it has been engineered for effortless composure and refined power delivery.

“This is illustrated by the significant levels of low down torque available which makes pulling away very smooth and for an exceptionally relaxed driving experience.”

Engine, exhaust and tyre noise have been engineered to be inaudible as far as possible, both internally and externally.

A full technical specification will be released later in the year.