The frequent claim that there is a shortage of general stock no longer seems to stand up to scrutiny.

Firstly it should really be expressed as a ‘perceived’ shortage of available stock because CAP’s analysis paints a slightly different picture.

Although the year began with fewer cars in the open market than at the same point in 2008, disposals volumes collated by CAP for January to April show a 7% increase on the same period in 2008.

Rather than fewer cars actually being sold, it is the significantly higher conversion rates causing reduced levels of auction re-entry that is causing a perception of reduced trade sales and stock.

The used car market’s susceptibility to oversupply has been a constant problem in recent years, leading to swathes of unwanted vehicles and ever decreasing values. Now all that has changed and it shows little sign of reverting any time soon.
The dramatic fall in car production and reduced pressure on dealers to hit unrealistic volume bonuses, coupled with a lack of part-exchanges, have all led to dealers actively sourcing stock in the open market.

The other trend being bucked is the long-established one of weaker used values for heavy 4x4s and large executive models. Last year, this trend accelerated so that some off-roaders saw up to 50% wiped off their value, while small cars consistently outperformed the market.

Now ‘big stuff’ is on the rise, as June Black Book revealed. Land Rover, and the Range Rover and Sport derivatives in particular, are attracting the fiercest of bidding from the dealer network.

This year is notable for seemingly reversing the trends of recent history. Not only are last year’s ‘untouchable’ vehicles proving to be in serious demand, the once derided white car is often enjoying a significant premium. In the case of some niche cars, this premium can be 10%.

And some disposers of high end cars are enjoying very strong returns on prestige cars like Bentley and Ferrari.

Trade customers are paying CAP suggested retail for some of these and immediately exporting them to Europe, where the Sterling/Euro exchange rate has made them exceptionally good value for money.

In general terms the market remains stable and buyers are no longer bidding hard on poor condition vehicles as they were during the first three months of the year.

But good condition and high specification continues to attract fierce competition. There seems to be no imminent return to the old problem of oversupply, thanks to the ongoing shortage of late cars.

For example, one manufacturer cancelled almost half of its planned sales recently forcing dealers who are already low on stock to compete hard for every unit on offer. Such is the frustration that rumours are flying that the manufacturer had ‘set up’ two dealers to compete against each other at one sale in order to push prices up.

CAP’s own observations at the sale scotched that particular myth as the evidence was that the competition was entirely natural and involved a large number of buyers. But this anecdote serves to illustrate the continuing frustrations of dealers more used to plenty of choice in an oversupplied market. 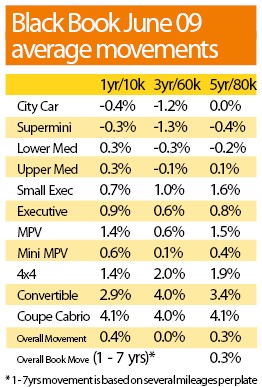