Chevrolet's Volt hybrid will do 230mpg in city 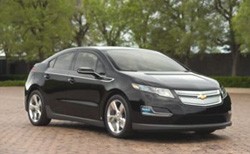 The record-breaking levels of fuel efficiency would extend to combined city and highway driving, where the plug-in hybrid is expected to exceed 100mpg, allowing the Volt to drive about 230 miles on little more than two gallons of petrol, reported Financial Times.

The Volt, due to go into production in late 2010, will be powered mainly by a battery pack with a 40-mile range. A small internal combustion engine will extend the range by recharging the battery while the car is in motion.

Pricing has not yet been announced but it has been previously suggested the car could retail at around $40,000 (£24,336).