Koenigsegg Automotive believes Saab didn’t work with General Motors because “it was never given the attention it needed”. 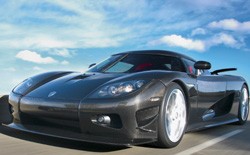 Christian von Koenigsegg owner of the Swedish sports brand, told The Financial Times: “It was very difficult for Saab to have a clear vision for the future and fine-tune its products.

“We will unleash the creativity within Saab and allow them to do what they’re good at.”

Analysts have called into doubt whether Koenigsegg can go from making and selling 20 cars a year to the much larger numbers expected by it for the Saab brand.

Koenigsegg wants to restablish Saab as a “quirky, niche brand like it was in its 1970s/80s hey dey”.

He said: “It is a more personal and unique brand than other carmakers. It should be a statement in itself.”

The deal for Saab to be sold to Koenigsegg by GM is still not complete. The agreement is subject to a €400 million loan from the European Investment Bank which has to be agreed by the Swedish government which has already stated it is unwilling to financially support its domestic car manufacturers.