Consumer demand has slipped for a fourth month in a row, according to John Simpson, managing director of Manheim Retail Services.

Figures for June show a small slip in average used car sales per month of 11.4 in June compared with 11.6 in May.

Month-on-month showroom and online enquires for used cars were also down, but only marginally from a combined figure of 35 in May to a combined 34 in June.

Simpson said: “Having already had a very strong start to the year, the only vehicle segment that experienced a discernible increase in sales in June was the small hatchback segment.

And after such a buoyant Q1, the apparent stock shortage in the market overall has led to sold volumes falling back in the last three months to levels similar to those experienced at the same time last year.”

The normal seasonal softening of the wholesale market has yet to happen.

However, he said that, with stock for retail down £268 in June compared with May, this may point to a turning in the market.

“But with conversion rates at 87% we are still seeing the vast majority of auction entries finding willing buyers.”

One surprise in June was the compact executive segment which increased in value.

However, part-exchange disposal shows no signs of softening. Pilkington said: “No softening of the market can be detected in the disposal of unwanted dealer part-exchanges with average values up from £2,067 to £2,093 and conversion rates remaining at 84%.

“These figures are all the more surprising considering that the June product was slightly older with higher mileages than that of May, but is great news for dealers using Manheim to quickly and efficiently liquidate unwanted stock.” 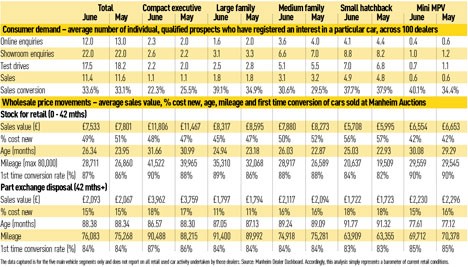