The threat from the Chinese car industry is the subject of much punditry. Talk of Chinese companies growing fat on the vast home market and then invading western markets is rife, but the reality is more prosaic.

Sales of Chinese cars in the UK are currently zero, but another Asian economy is doing very well in our market – India is easily the fastest growing source of cars in this country.

A few years ago we were asked by a car manufacturer if UK buyers would react badly if they supplied this country from an Indian factory.

Given that Vauxhall was then supplying Zafiras from Thailand and Mercedes was sourcing C- Classes from South Africa, we could not see the problem – the country of origin is associated in the public mind with the brand rather than the factory.

So it has proved: no-one objects that their Hyundai (i10 and i20), Nissan (Pixo) or Suzuki (Alto) comes from India.

There is an interesting distinction between the Indian and Chinese industries. Tata notwithstanding, India is becoming known as a production centre for small cars that are primarily designed for rich countries, whereas China sees its future as an independent design centre for unique products. 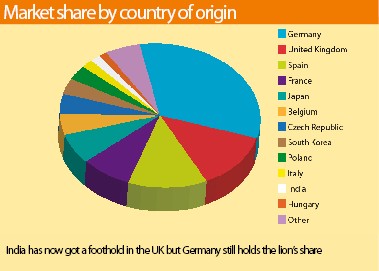 So far, India has more tangible results to boast about in western markets. Not entirely coincidentally, the other country that is rapidly increasing market share in the UK is the Czech Republic.

When communism fell, the Czech government took the pragmatic decision that it would not try and build up its own motor industry, but would sell Skoda to whichever European company offered it the best prospects. As part of VW, Skoda has gone from strength to strength and it has acted as a beacon to other manufacturers.

The Aygo/107/C1 trio plus the Hyundai i30 come from the Czech Republic which now supplies more cars to the UK than Korea.

Conversely, some traditional European production centres are looking sickly – since the scrappage scheme started Italy has fallen behind India and Poland in UK market share terms.
But what of our own domestic production?

There were predictions that scrappage incentives would not help the UK as so few of our factories made small cars. So far this year, share has slipped slightly but overall production has been helped by the incentives.

Besides scrappage incentives are effectively a pan-European policy – if Germans buy more Honda Civics, that is just as beneficial to the UK as extra sales here.