Perrys has appointed three new managers at its Peugeot site in Portsmouth to help drive its car sales and parts distribution. 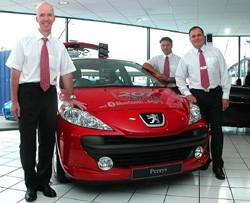 The group has also invested in its multi franchise Walton Road development which features the Fiat, Mazda and Peugeot brands, with a used car centre and refurbishment of the Perry Service Centre.

Among the jobs created by the Walton Road redevelopment are three new senior management posts at the Peugeot dealership.

Steven Stanton has been appointed as new car business manager. He began his career as business manager with Doves in Andover and with Hampshire-based dealer group Sparshatts, before joining Perrys last month.

His strategy for car sales looks beyond the current scrappage scheme: “The scrappage scheme is almost exhausted and I want Perrys to be in a strong position for when it finishes.

“We are focussing on existing and lapsed customers and encouraging retail part exchanges in order to bring used cars in for the used car site.”

Parts manager Steve Talbot was recruited by Perrys to spearhead a new trade parts operation and help improve the quality of its aftersales service.