Keeping your DMS in touch with latest developments

Advances in technology have changed the face of the retail market and made dealer management systems a prime tool in retaining and finding customers.

Functions such as text and email are being used more then ever not just to remind people their car is due for a service, but to promote new products and models.

In an age where mobile phones and computers are increasingly used to communicate with customers, it makes sense to ensure your DMS can cope with this growing trend.

Historically, DMS systems were derived from accountancy software and adapted for the trade rather than being developed as bespoke items.
Products tailored to dealers’ needs are now available, but as use of the internet increases both from a retail and social viewpoint there is more emphasis on DMS being as simple to use as the web.

Neville Briggs, managing director of Pinewood, said: “If you can use a web site such as Amazon or eBay, you can use our Pinnacle DMS. Most dealer staff can competently operate the system with as little as a day’s training.

“Making Pinnacle as easy to use as possible was a key part of the brief for designing the system. Why? Because our experience is DMS systems that are difficult to use simply aren’t used. Software that cannot be easily understood and utilised becomes an unproductive hindrance to dealers.”

Briggs said some systems are difficult to use because they are based on old technology, some dating back 20 years, which has been continually modified.

Simon Verona, managing director of Dealer Management Services, said the company continually listens to customers’ feedback about wanting a simple, focused and easy to use system.

Verona said many dealers use DMS software that is several years old, and lacks modern capabilities.

He added: “This makes the systems more cumbersome and difficult to use, and because of this dealers make less use of the functionality available.

“Our Navigator product provides high levels of features with an equally high level of usability. This means dealers can more easily take advantage of the functions.”

One issue dividing suppliers is whether dealers’ servers – the brain of its DMS system – should be kept on site or hosted on the internet.

A server kept at the dealership does give the business an element of control over backing up and upgrading its own software.

However, servers based on the internet can be upgraded remotely avoiding the need for someone to visit the dealership.

Mark Cooper, managing director of Dragon 2000, said: “Our view is that while the internet offers valuable advantages in being able to communicate with other data sources (DVLA, manufacturer systems etc), to wholly rely on an internet connection to run a local DMS places that dealership at too much risk. Holding the core data at the dealership avoids the ‘I’m sorry our systems are down’ that occurs when centralised systems cannot be reached.”

Although Dragon 2000 uses the internet, it is not completely reliant on the web.

Pinewood’s Pinnacle product is hosted on the internet with dealers’ servers kept at a secure off-site location.

Briggs said: “The fact is our data storage is much more secure than any dealer facility we have ever seen.

“Data is stored on remote servers and is instantly switchable – if one server fails the data is automatically routed to another, providing a seamless service. The data warehouse itself has fire and flood protection as well as its own generator if the electricity supply fails. All data is automatically backed up.”

Because of people’s reliance on technology to organise their lives a DMS should definitely have text and email functions.
Some customers expect these forms of communication over any other.

According to Ken Trinder, head of business development at Epyx, those dealers who do not invest in this technology will lose customers. 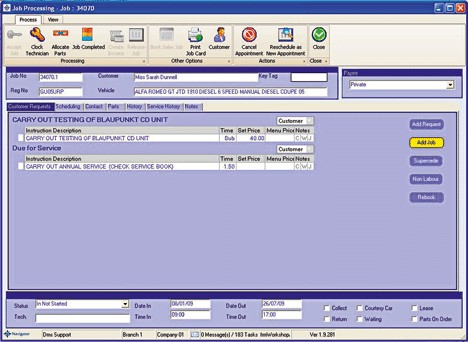 Trinder said Epyx sends about 5,000 service booking reminders a day with the majority being texts. By reminding people in this way Trinder said it has practically eliminated “no shows”.

He said: “We all lead busy lives and the more dealers can use email and texts, the better.”

Briggs said the use of emails and texts has “exploded” among dealers in recent years.

He had dealers within his customer base who had sold a new car within an hour of sending out a text or email after targeting specific customers during a campaign.

Adam Palmer, marketing manager for ADP, said its email and text functions, plus its ability to link its Autoline product to the internet, has contributed to its popularity.

The company built email into its DMS two years ago and introduced text a year later.

He said: “Dealers need to realise the customer will know the price of a car by looking on the internet. It means they need to offer a customer better value because they are going to know the prices. The whole thrust of the internet is changing the way dealers deal with customers.

“Text is a function we have always wanted so dealers can communicate with people in this way.

“This is now the way things are moving because customers want it and manufacturers want to encourage dealers to use it as well.”

Another useful function of a DMS which dealers should be making the most of is capturing customer details.

Not only can this information help remind them when a customer may be likely to change their car but can also match part-exchanges with buyers.

Palmer also recommends information such as price lists, labour time guides, service menus and details from third parties such as Royal Mail, CAP and Glass’s guide should be put in the system for reference.

Palmer added: “For a large number of dealers, the data provided by the manufacturers directly into Autoline is a prerequisite for meeting the manufacturer’s dealer standards.”

According to Palmer, customer relationship management is vital in helping a dealer run a successful business.
Once data is recorded, systems can generate emails, texts and reminders for MoTs and services or free seasonal health checks.

Palmer said other information such as CAP and Glass’s guides can also be included to help dealers make true valuations of part exchanges while links to Experian and HPI can assist with providence checks.

While most suppliers agree customers’ basic details should be put into the CRM, Trinder is not convinced about adding personal details such as hobbies and interests.

In his view the make, model, service schedule and how much mileage a person does was more important.

He said: “I’m sceptical about asking customers about their hobbies and think a lot of money is wasted in our industry on invitations to motorsport events and golf days.

“In these austere times, I think a lot of them have been dropped.”

What to consider when buying a DMS

A poll on AM-online revealed that 70% of respondents thought their DMS was too complicated, with only 17% disagreeing.
Voters included managers, dealer principals, head of business and sales managers.

A separate AM-online survey the previous month showed that 66% of respondents are using a DMS which is more than six years old, compared to 33% of dealers whose software is younger.

The results support suppliers’ views some systems could be running on older technology.

In addition it shows the drive to make them easier to use is the right direction to take, especially as the internet impacts more on lifestyle from a retail and social view point.

It means systems are likely to become as easy to use as sites such as Facebook and Amazon as dealers prefer the computer they use at work to be as simple as their one at home.