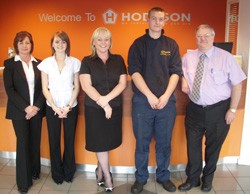 The new posts were created across several departments and include a new service advisor, sales administrator, warranty controller, apprentice technician and for the first time a host, to welcome and help customers when they enter the dealership.

The five new faces are the latest at Hodgson in a period of growth which has seen the company acquire the Mitsubishi franchise, which recently became the fourth brand to join the company.

David Lowes, group general manager said: “A continual commitment to growth and in particular to developing our people and recruiting new skills is a major contributing factor to the continued success of the company.

“We believe is the cornerstone of this business, so supporting them and constantly striving to better skills as well as hiring new people that compliment and add to the existing team will ensure we continue to prosper into the future."