The most commonly cited reason for rising values in the current used market has been shortage of stock.

However, research at CAP suggests that the reality is a change in the pattern of both supply and demand.

Because so many dealers have been reporting difficulties in obtaining trade stock up to one year old in particular, there is a widespread assumption that later plate cars are in short supply.

But it may come as news to some that during parts of this year when dealers and commentators were lam-enting the shortage of late cars there were actually substantially more available than in 2008 when the complaint was oversupply.

A like-for-like comparison of raw disposals figures at auction reveals that the proportion of cars up to one year old going into auction was 9.4% of the total up to the end of June this year.

So this year has seen an increase in supply through auction for cars in both age groups.

Research has consistently revealed a decline in retail demand at dealerships this year.

How is it that a market which is usually characterised by almost constant asset depreciation is now seeing values rising in the face of reductions in retail demand?

The answer lies in the shift in market dyna-mics. We have moved from a supply-led to a demand-led market.

In normal circumstances more new cars are produced and registered than either business or the retail public actually needs. That surplus is now absent.

The bulk of additional demand at auction is believed to be from franchise dealers. They have been forced out into the open market due to the slump in new car sales and the consequent lack of part-exchange units coming in.

This rebalancing shows no sign of altering in the immediate future.

Car production has been reduced, which means less availability of cars to turn into late used stock.

Many manufacturers have pulled away from short-cycle business, such as daily rental, which has further reduced availability.

At the time of writing CAP’s research suggests that the supply of stock into the open market is due to reduce further in the next few weeks.

There is no sign of the dynamic changing any time soon. 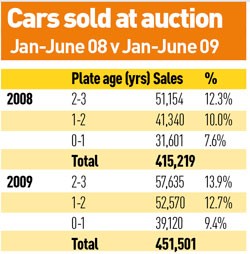