Ford’s next generation Focus will go on sale in the UK in the first quarter of 2011 and first pictures have been revealed.

The new Focus has Ford’s evolved kinetic design which has been included on new models like the Fiesta and Ka.

The new Focus will be nearly identical in all markets, with 80% parts commonality around the world.

The new Focus will be one of up to 10 unique models to be built from Ford’s new C-car platform, which is expected to generate total sales in all regions of two million units annually by 2012. The first of these will be the new Ford C-Max and Ford Grand C-Max – unveiled at the 2009 Frankfurt Motor Show – for launch in Europe in the second half of 2010. 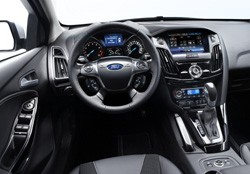 Alan Mulally, Ford’s president and CEO, said: "The efficiencies generated by our new global C-car platform will enable us to provide Ford Focus customers with an affordable product offering quality, fuel efficiency, safety and technology beyond their expectations."

Initial production of the new Focus will be concentrated at the Saarlouis (Germany), Michigan (United States) and Chongqing (China).

The global engine lineup for the new Focus will include a range of Ford EcoBoost four-cylinder turbocharged direct injection (DI) engines – including the 1.6-litre unit in Europe and a choice of Duratorq TDCi common-rail diesel engines, all of which offer reductions in fuel consumption of between 10 and 20% compared to the outgoing models.

The new Focus will go on sale in the UK in the first quarter of 2011.