Wilsons Auctions is doubling capacity at two of its auctions houses following a £2 million investment. 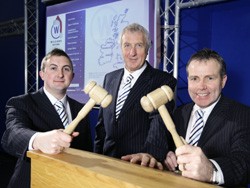 The independent auction house, founded in Northern Ireland, has also announced a strategic partnership with Jet Logistics in Stratford upon Avon to create a service where fleet vehicles can be de-fleeted, refurbished and sold at one facility. The Jet Logistics auctions managed by Wilsons Auctions will take place weekly.

Wilsons says the concept will save fleet users “thousands of pounds” in transport charges.

The investment into the UK operations at Telford and Queensferry will create over 20 new jobs.

The recruitment drive includes Jacqui Le Put, who joins the Wilsons Auctions team as UK sales director and will be supported by Andy Conde who joins as director of auction development.

Peter Johnston, group operations director at Wilsons Auctions, said: "The expansion is exciting and gives the staff at both complexes the opportunity to double the throughput at each site, enabling Wilsons Auctions to target fleet vendors who want a fresh approach to fleet sales in the UK."

Wilsons Auctions currently have six permanent auction complexes based in Mallusk and Portadown Northern Ireland , Dublin, Dalry in Scotland, Queensferry in Wales and Telford in England.