The recent announcement that Volkswagen is to take a 19.9% share in Suzuki shows how serious the company is in becoming the world’s largest car manufacturer.

It has set 2018 as the date to achieve that goal and current trends suggest an eight year time-span is quite pessimistic. However, past performance does not guarantee future success, so how likely is VW to reach its goal?

That is where we come back to the Suzuki deal. It gives VW a boost in two important areas of relative weakness.

Firstly, Suzuki has effectively found a way of making water flow uphill: a relatively small company that can make money from small cars.

That is a feat no-one else in the developed world has managed, and VW is well aware that it is not the most cost-efficient manufacturer, although it is light years ahead of the bloated VW of the early 1990s that could not make a profit until its factories were running at over 100% of capacity.

Meanwhile in Europe, VW has proved most adept at brand management.

As well as VW, which has the most upmarket image of all the European mainstream carmakers, Audi has struck gold and Skoda has emerged as a strong player.

Interestingly, Skoda has subtly changed its positioning from being mainstream cars at economy prices to semi-premium engineering at just below mainstream prices.

That leaves just one major VW brand searching for a consistent identity: Seat was originally intended as a low-cost Spanish brand.

It has flirted with re-invention as a sporty brand and Alfa Romeo was mentioned for a while as a target.

In fact, sales in 2009 have gone pretty well thanks to the new Ibiza and Exeo, but the fact they have two opposite engineering approaches (the Ibiza is latest-generation VW platform and Exeo is previous-generation Audi A4) shows that the long-term strategy is still very much up in the air.

The fact that VW seems able to combine brand management, increasingly efficient manufacturing and nimble Asian footwork was underlined by the Akio Toyoda, president of Toyota, who wrote recently that he was “jealous” of the new Scirocco. 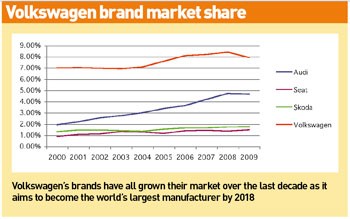