Consumers turning away from franchised dealers

Time and again franchised motor groups tell us they get most of their income from service and parts.

Why then, are they so bad at it?

Most motorists don’t like franchised dealers doing their servicing – even if cars are still under warranty. They are much happier using independents.

This conclusion comes from the Consumers’ Association which has just asked questions of half a million people in its annual multi-topic survey.

There were 64,000 voluntary respondents in respect of 67,000 cars (arising from multi-car households).

According to the researchers who chewed through the data for the current Which?Car magazine, there was a wide variation between brands, but the satisfaction was not dependent on price.

It was mainly the touchy-feely stuff; how they were treated and how long the work took.

The results surprised the report’s compilers. Claire Evans, deputy editor, said: “You might think that franchised dealers, with their specialist knowledge and mechanics, would beat the independents hands down when it comes to service satisfaction.

“In fact the opposite is true. Owners are much happier with the work provided by independents.”

If independents are better favoured they are on a rising trend in prospective penetration of the nearly-new car service business. It is only a couple of years since warranty ceased to be invalidated by getting service stamps from outside the franchise network and most motorists have still not caught on that they can shop around in the first years of ownership.

Which? figures show that more than 90% stick with the franchised network for the first two years. It’s still 60% in year five and then 40% in year eight. Evans said there appeared to be no distortion in the responses as a result of the brand having reliability issues. Toyota had recall after recall in the sampling period, but the dealers still had a top quartile score.

Nor is location a factor. Daihatsu has a small network, but has the best score for its service shop approval. Maybe Daihatsu owners – the Darby and Joan of new car buyers – regard a trip to the garage as a day out.

Which?Car said the 93% approval rating enjoyed by the Daihatsu network (an extraordinary year-on-year rise of 6%) is the highest score ever seen in the survey’s 40-year history.

At the other end of the prestige scale, Porsche is doing a great job. Though only in eighth position and with a satisfaction score of 80% it is the fastest mover. It was only 15th in the league table last year.

There are some tricks for dealers to play to keep the new car owner coming back. Mini is the master of it. It has 87% service retention as a result of the TLC service pack that it sells for the first few years with a new car.

Only two brands have owners (of all ages of cars) who prefer a franchised dealer to an independent workshop: they are Daihatsu and Lexus.

Some pretty big brands get a drubbing on service shop satisfaction. In fact of all the volume names, only Toyota gets a respectable score and a place in the top 10.

Fiat is rock bottom with customer satisfaction only 69%. That’s even lower than last year despite the entry of the hugely successful Fiat 500.

Renault in 32nd place is equally shocking at 71%. The two staple British leaders of Ford and Vauxhall are at 72% and 73% respectively. Peugeot Citroën has a dreary score of 74% satisfaction. So does Audi which is a surprise given what the German brand sets out to be. Sister brand VW is only a percentage point better and on a level with BMW. The remaining UK top-10 volume seller is Mercedes which only hits 78%.

The really big defection involves the Alfa owner. Ninety per cent of them are very happy with their independent service garage which is the biggest score of the lot. There is a 19% balance of people depending on an independent garage rather than a dealer – presumably because there are so few Alfa dealers. The next biggest preference for independence is among the sister-brand Fiat dealers (13%) though its overall satisfaction at 82% is the worst there is other than (now sister brand) Chrysler.

There are plenty of other brands where going to an independent delivers a double-digit improvement in owner satisfaction. They are Kia, Nissan, Vauxhall, Ford, Citroën, Renault and Seat. Satisfaction in all cases is 12% better outside the franchised trade. 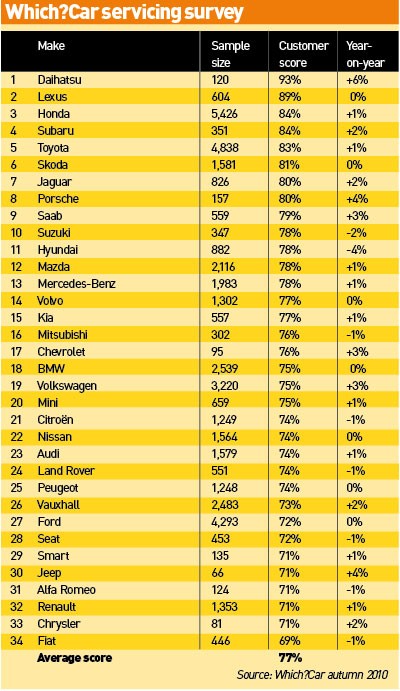