True comparisons remain difficult, with 2009 figures inflated by scrappage-driven demand, but some of the major brands, models and markets are still in the red, according to JATO Dynamics.

The powerhouses of European new car sales - UK, France, Germany and Italy - all posted lower figures for September 2010, than the same month in 2009, with Germany on course to sell one million fewer cars than last year.

As traditional sales territories for the industry’s big names, this has consequences for the leading brands and models.

The top five brands - Volkswagen, Ford, Opel/Vauxhall, Renault and Peugeot - posted September sales down by an average of 9.7%, while the top two models – VW Golf and Ford Fiesta – were down 28.9% and 22.2%, respectively.

David Di Girolamo, head of JATO Consult, said: “Although true year-on-year comparisons remain difficult, the level of new car sales in the ‘big five’ markets this year has been bad news for the global volume brands, who have traditionally relied on them and will need to look elsewhere for growth.”

Although down almost one fifth in September (-19.1%), Ford has improved on its mid-year position and is back in second place, ahead of Renault, year-to-date.

Mercedes and BMW have consolidated their positions in the top ten selling brands and are ahead of Toyota in September sales.

The new Volkswagen Polo continues to buck the trend in sales and has posted the only positive figure of the top 10 models, in September.

Even though sales comparisons are versus a previous generation model, its success is notable for gaining ground on key competitors.

Fiat’s troubles are indicated by the 10th position for its Punto, while Panda has dropped from the top 10 models completely.

Of particular note are the low sales for these models in their home market of Italy, where they were down 32.8% and 31.0% respectively.

The number of markets returning to growth across Europe is increasing, but it is the performance of the ‘Big Five’ on which the overall health of the region rests.

September is of particular significance in Britain, where it heralds a bi-annual registration change and is a key sales month in the market.

The 8.9% drop in sales vs. 2009 is a reflection of the downshift in post-scrappage demand.

By contrast, most of the Eastern European and Baltic states have returned to growth, albeit against very low 2009 figures, when these markets were suffering the worst of the global recession.

Di Girolamo said: “Europe has been through the scrappage highs and lows and now looks to be edging slowly towards recovery.

"The question is when will more favourable conditions return to the ‘Big Five’?” 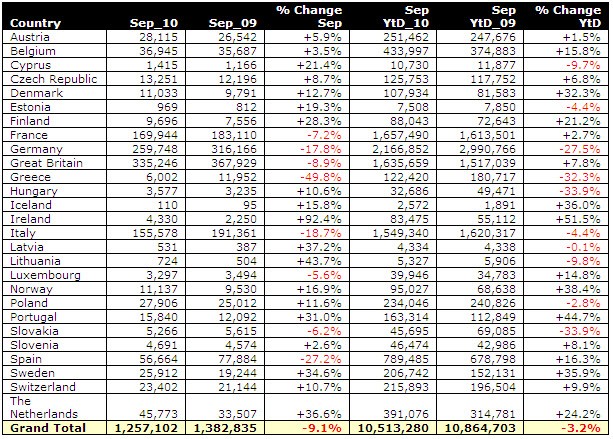