Although used car sales increased marginally in September, further evidence of a flat market was seen by another decline in the showroom and online interest, down three to an average of 37 enquiries in September and the third fall in as many months.

John Simpson, Manheim Retail Services managing director, said: “It would be easy to blame the September declines on a focus on new car sales, but historically this has not been the case.

Better news on conversion rates of test drives to sales, which improved by 4% to 35.5%.”

But he warned that dealers should be preparing for a long, tough winter.

“With the spectre of the impacts of the Government’s public spending cuts, there has never been a more important time to focus on those fundamentals: Is my marketing delivering an acceptable ROI? Do I have a comprehensive online marketing strategy? Am I geared up to driving every opportunity out of prospects who register an interest? “

Mike Pilkington, Manheim Remarketing managing director, said the end of the summer holidays normally injected a renewed vigour into the wholesale market and this was certainly the case for September.

Stock-for-retail values increased £421 to an average of £8,071, the highest for five months. Manheim found a slightly younger, lower mileage stock mix partly to blame, but the vast majority of the increase was based on natural demand. That demand, along with sensible vendor pricing policies, has driven first time conversion rates up to a very respectable 88%.

Average part-exchange values saw a modest increase of £27 to £2,201 although the increase was not universal with the medium family and mini MPV segments seeing the smallest decreases due to a slightly older, higher mileage model mix. Average first time conversion rates were also healthy at 86%. 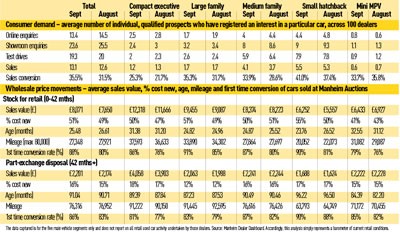