BCA says there is further proof that the used market is settling back into a more typical seasonal pattern as its latest Pulse for September report shows a significant rise in values in the fleet and lease car values, with more modest increases in part-exchange and nearly-new values over the month.

The average used car value at BCA climbed £33 to £5,938 in September. Performance against CAP Clean rose more than two points to 98.34%.

BCA’s UK operations director Simon Henstock said: “Although September has not seen the big value rises that were typical of the pre-recession era, much of that was due to August being so strong, with many buyers seeking to acquire stock ahead of the anticipated September rush.“

Fleet and lease saw values increase across volume (5.4%), budget (19%) and premium (2.4%) brands, suggesting that demand was broad-based and it was the product profile itself that was attracting the buyers.

Among part-exchange stock, most value growth was in premium brands, where values improved by 2%. Volume brands made a sub-1% improvement,and budget brands
fell 9.7%. 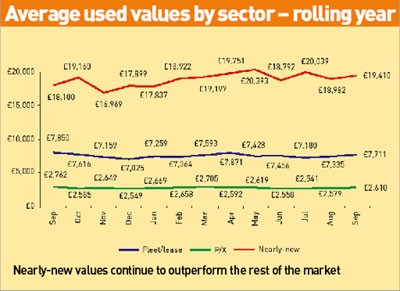