Toyota recalls iQ in the UK

Toyota has issued a voluntary recall on 12,000 iQ models produced between September 11, 2008 and October 22, 2010 due to a possible fault with the software used to manage the vehicle’s electric power steering (EPS). 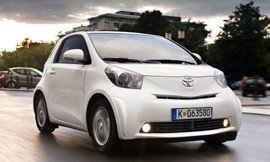 When driving on certain roadside safety side strips or 'rumble strips', signals received by the EPS sensors may be incorrectly interpreted by the EPS control unit, triggering the EPS warning light. Should this happen, the driver would need to apply extra effort to steer the vehicle.

The repair involves the update or replacement of the EPS control unit software. The job will take approximately two hours to complete and will be done for free.

Toyota will ensure that vehicles produced before October 22 2010, but not yet delivered to customers, will be checked and the necessary repair undertaken before delivery.

Jon Williams, managing director of Toyota GB, said: “We are committed to putting the customer first and have a total focus on the quality of all our products. We will liaise with our customers to carry out the repair procedures as efficiently as possible, with minimal disruption.”

Toyota dealers had to deal with a large recall at the start of this year with 180,865 vehicles affected in the UK. Dealers were praised at the time for how well they handled the process.