The council of the Independent Automotive Aftermarket Federation (IAAF) has confirmed Brian Spratt as its chief executive. 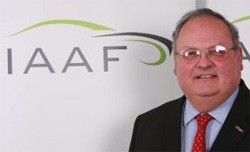 Spokesman David Russell, explained: “At the time of transition from ADF to IAAF, we decided to delay appointment of a chief executive for the broader organisation, simply because there were so many tasks requiring the directors’ attention in setting up the new membership section for independent garages.

"Brian provided a stable base for that activity in managing the Secretariat and continuing his responsibility for parts distribution members. We can now see the many advantages to the Federation in confirming Brian’s role across the whole organisation, offering wide industry knowledge, stability and commitment as well as his vision for the independent aftermarket; and we’re pleased Brian has accepted the challenge and responsibility.”

Quintin Cornforth, Peter Higgins, Tony Sackett and Richard Welland have stepped down as IAAF directors. Graham Knight of FPS Distribution and Jim Sharp of The Quality Factor have agreed to join the board and other appointments are to follow.

Brian Spratt has been with the Federation for 18 years, starting as trade secretary in 1992, when Reg Patrick as director general headed the Automotive Distribution Federation (ADF).