Mercedes-Benz has revealed details for its next generation C-Class which will go on sale in the UK in March 2011. 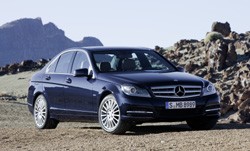 The German manufacturer said there are 2,000 new components to distinguish the latest version of the C-Class from its predecessor.

The front and rear sections of the car have been redesigned and there is now a high-resolution colour display screen in the instrument cluster.

Mercedes-Benz says fuel consumption on the new model has been improved by up to 31%.

The C-Class is the highest-selling model series for Mercedes-Benz.

The current series has found well over one million buyers worldwide since its launch in March 2007 (98,000 UK sales). Since the introduction of the first C-Class in 1982 (then known as the model 190), Mercedes-Benz has sold more than 8.5 million vehicles in total in this segment.

Prices will be announced closer to when the C-Class goes on sale in March.

AM Poll
Will e-scooters and micromobility reduce UK car ownership by 2030? Please leave a comment
Vote
View all
3209