Dealers are being urged to get back in touch with their used car customers as well
as prepare for an aging used vehicle parc over the next couple of years in order to help them grow out of the recession.

The findings come from BCA’s latest Used Car Report, which surveyed 4,000 people through British Market Research Bureau (BMRB). Forty-four per cent said they had no contact from the dealer they bought their car from.

Professor Peter Cooke, KPMG professor of automotive management at the University of Buckingham and author of the report, said dealers couldn’t ignore the potential in the used car market.

According to the research within the BCA report, 50% of car buyers say they will buy their next used car from a franchise dealer. In addition, they can make the highest profit margins from any of the used car sales channels if they sell their franchise’s own make of used cars.

The market is rising in value and, as Cooke explains, there are more profit opportunities in used car sales.

He said: “The market is strategically important to dealers. Dealers need to do more in this area. Forty-four per cent of customers had no contact from the dealer they bought the car from and only 32% had a call reminding them their car was due a service or to ask if they were happy with the car.”

Cooke said the BCA report con-firmed the motor industry had begun the long climb out of the recessionlast year, despite new and used car volumes reaching their lowest points this decade.

Although volumes fell in both the new and used markets last year, values held up well despite the many econ-omic pressures.

However, Cooke said dealers had to prepare for a changing used car parc, which is likely to age “quite dramatically”.

Cooke said: “Dealers selling older used cars will benefit from access to a greater number of older cars from the ageing car parc.

“On the other hand, franchised dealers, in particular, are likely to face a marked and lasting shortage of used car stock in their traditional ‘younger used car’ trading zone – cars up to five years old.”

For used car retailers, who deal primarily in younger used cars (up to five years old), there will be around 2.5m fewer of these units ‘in stock’ by 2012 than at the high point of 2005. This is around a million fewer than the figure at the end of 2009.

Dealers need to take account of the changing shape and mix of the used car market.
The overall car parc growth has stalled for the time being and is ageing, particularly in the younger used car groups as new car sales have fallen badly and will take some considerable time to recover.

Cooke said: “The result will be that franchised dealers, in particular, need to review the range of used cars they sell, perhaps moving beyond their traditional strategy of selling younger used cars up to five years old.

“Equally, dealers may seek to review the total value-added opportunities they pursue with both new and used car sales. The ageing car parc cannot be cured quickly, it is therefore important to maximise revenue and profitability from existing opportunities.”

Thirty-two percent of respondents to this year’s BCA survey had bought a used car in the past two years compared to 35% last year and 37% two years earlier. Sixty-eight per cent of car buyers had opted for a used car rather than a new one.

Personal experience remains the biggest influence on car buyers, cited by 34%, while the views of family and friends are considered important by 30%.

A test drive influences 22%, while 18% of motorists said ‘car internet sites’ now influence what type of car they look for. This figure has nearly doubled in the past two years.

When choosing which used car to buy, the ‘right price’ and the ‘right make and model’ remain the crunch factors for more than 40% of car owners. The importance of ‘a car with low mileage’ has increased by five points to 33% this year.

Used car buyers are clear what they are looking for when choosing a used car retailer: ‘the ‘right car at the best possible price’, ‘a good deal’, ‘to trade in their existing car’, ‘to deal locally’ and to do business with a ‘reliable and trustworthy’ organisation.

Ninety-five per cent of used car buyers were satisfied with their used car in this year’s survey – 72% said they were ‘very satisfied’ and a further 23% were ‘quite satisfied’ with their purchase.

The next used car

The number of motorists who think they, or a member of their family, will ‘certainly’ or ‘quite likely’ buy a used car in the next 12 months, dropped one point to 16% – while those who believe there is a 50:50 chance of doing so rose two points to 10%. Two out five motorists intend to buy a used car next time they change, although the number of prospective buyers planning to buy a nearly-new car has fallen to 8%; compared with 9% last year and 13% three years earlier.

Following a two-year fall to 47%, the number of car owners planning to buy their next car from a franchised dealer rose three points to 50% in 2010 – at the expense of non-franchised ret-ailers who saw their potential share of the market drop from 14% to 11%.

Of those who bought a new car under the scrappage scheme, 38% bought one for the first time, while 30% said they ‘replaced a car they otherwise wouldn’t have changed’ during the scrappage period.

Cooke believes nearly a quarter of new car scrappage scheme deals would have probably taken place anyway, irrespective of the £2,000 incentive on offer.

Of those not taking advantage of the scheme, 38% did not have an eligible vehicle, 30% didn’t want to replace during the scrappage period and 11% will not be replacing their car in the future. Eight per cent could not find a car that met their needs, while 6% did not believe the £2,000 incentive was big enough. Four percent were not aware of the scheme and 3% could not afford to participate.

The best practice guidance has been issued following the publication in March of the OFT’s market study into the second-hand car market which found a number of problems.

This study found that consumers lose an estimated £85m per year in connection with fixing unresolved faults that are the dealer’s obligation to correct, issues around illegal clocking, dealers pretending to be private sellers, the use of illegal disclaimers and failures to disclose sufficient information about vehicles prior to sale.

The OFT campaign is being supported by the Retail Motor Industry Federation RMI).

Paul Williams, RMI chairman, said: “It’s really important that people are well informed when purchasing a used car and we fully support the OFT’s campaign to raise awareness of consumers’ rights, which will lead to elevated levels of consumer confidence.”

The new guidance and checklist is intended to help dealers comply with two important pieces of consumer protection legislation: the Consumer Protection from Unfair Trading Regulations 2008 which ban unfair commercial practices towards consumers, and the Sale of Goods Act 1979 which governs dealers’ legal obligations to consumers with regard to the quality, fitness and description of the vehicle being sold, and consumers rights to redress when something goes wrong.

The checklist highlights some of the practical steps dealers should take to help ensure compliance, including clear dos and don’ts relating to pre-sale history and mileage checks, checking the vehicle’s mechanical condition, providing customers with important information before the sale and dealing with complaints and issues around faulty vehicles.

Heather Clayton, senior director of the OFT’s Consumer Group, said: “We hope that this guidance will improve business practices in the second-hand car market and lead to fewer complaints from consumers.

“Tackling unfair practices in the second-hand car market is an OFT enforcement priority and we will continue to work with local authority Trading Standards to take action against dealers engaging in sharp practices.” 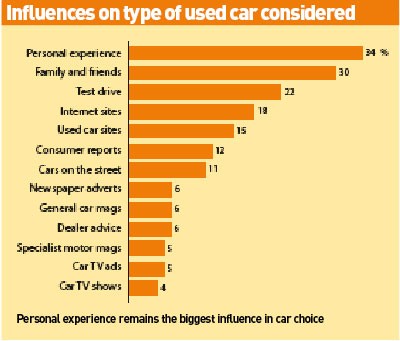 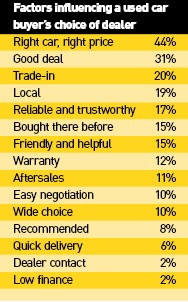 The mix of used car sales is virtually unchanged over  the past two years.

Hatchback sales account for 46% of the used car  market with saloons remaining at 20%.

However, sales of off-road vehicles edged up two  points to 7% of the market, while estates fell one point  to 8%.

Diesel-engined cars’ share of the used car market  reached 36% this year, from 33% in 2009 and 26%  three years earlier – growing ever closer to diesel’s  42% new car market share in 2009 and reflecting the  growth in diesel power within the fleet market. 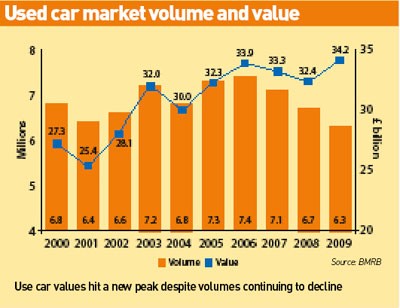