BrandIndex, YouGov’s daily brand perception tracker, has shown that Toyota’s recall has triggered a fall in how the brand is perceived by consumers.

Going back to January 2008, the Toyota brand has consistently ranked among the top automotive brands tracked in BrandIndex and the top 10% of all brands tracked over the last two years.

Since late January 2010, when the car manufacturer announced a recall of several million vehicles across the world, its brand perception scores have dropped dramatically in the UK, Germany, but by far the worst affected is the US market.

Ted Marzilli, global BrandIndex managing director, said: “While the dramatic decrease in brand perception may not be surprising, the more important question for Toyota and its competitors is the likely duration of the dent in consumer perception.

“Following safety violations at Southwest Airlines in March 2008 resulting in nearly a thousand cancelled flights and a $10.2 million fine from the FAA, it took them over six months to recover.

“The Toyota crisis is similar in magnitude and we wait to see whether there will be a similar recovery period, providing no additional issues or missteps occur over the next several weeks and months.” 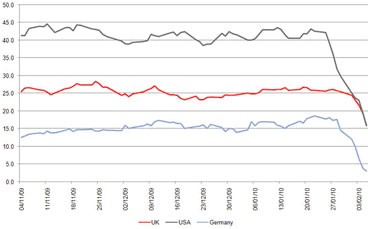