The used car market is headed towards a period of stock shortfalls as weak new car sales in 2008 and 2009 impact the availability of three year-old ex-fleet models.

According to research from Carsite.co.uk, with around 75% of fleet purchases expected back onto the second-hand marketplace within the first three years, the sudden fall in new car sales from March to September 2008 is expected to create a mirror effect over the same period in 2011 for the number of used models available for sale.

The number of used fleet models being fed back into the used car market is expected to be stable until around March 2011, before decreasing by around 20% to September 2011 and a further 20% to March 2012. After a year of supply at this level, ex-fleet stock is expected to increase in availability again as a result of the stronger new car sales performance in March 2010.

Alistair Jeff of Carsite.co.uk said: “The used car market is heading into a significant period of change, with the next two years seeing even further reductions on the availability of ex-fleet vehicles.

“Some used models have experienced significant increase in value over the last 12 months and the reduced supply from 2011 to 2012 should strengthen residual performances but potentially trigger further price increases. With the scrappage scheme gone, the focus is back on the used car market. It’s a very interesting time for the industry.”

The variety and choice of ex-fleet models entering the used market over the next few years could also become more restricted as businesses focus on reducing the costs of running company cars.

A new survey by GE Capital’s Fleet Services business has revealed that employees are receiving an increasingly limited choice of company cars with over 72% of fleets now offering only a single or limited range of models. Companies affected by this reduction in choice have increased 10% in the last year. 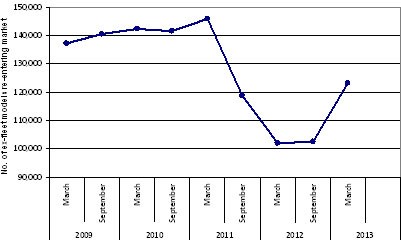