Seat is finally replacing its Alhambra seven-seat people carrier with a new version which will go on sale later this year. 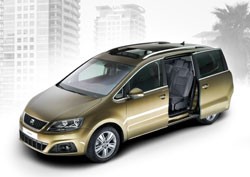 The new model will come with a new engine line-up. The TSI unit delivers 148bhp, while the two TDI engines offer 138bhp and 168bhp. Start stop engine technology and brake energy recovery are included as standard to boost economy to 51mpg and carbon dioxide emissions of 143g/km on the 2.0-litre diesel model.

An optional DSG dual-clutch transmission will also be available.

The new Alhambra will be produced in Palmela, Portugal and pricing for the UK will be revealed when the car goes on sale after summer.