Suzuki has revealed its third generation Swift which will go on sale in three and five-door versions in the UK this autumn. 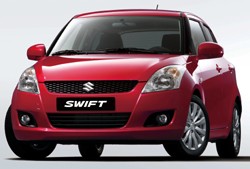 The new Swift will come with a new 1.2-litre petrol engine which produces 92bhp, which is slightly more than the outgoing 1.3-litre unit.

Fuel consumption on the combined cycle is now 56.5mpg for the manual transmission model, an improvement of 7.8mpg over the previous 1.3-litre unit.

Emissions are much lower as well; the new 1.2-litre engine with manual transmission produces 116g/km on the combined cycle; representing a 24g/km or 17% improvement over the 1.3. An optional automatic transmission will be available for the petrol engine from launch.

A 1.3-litre diesel engine will also become availble and planned for UK introduction in early 2011; this engine emits 109g/km (down from 119g/km) and has fuel consumption of 67.3mpg.

Full details on the UK specification and pricing will be announced later in the summer.